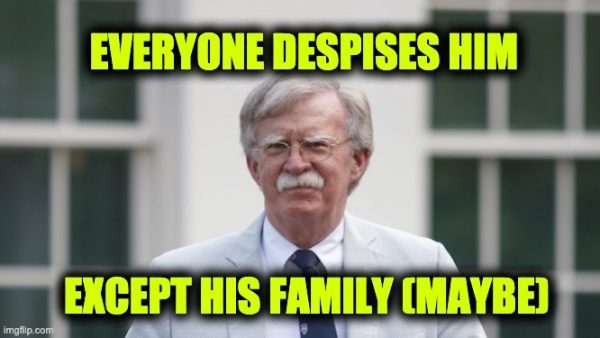 Bolton is portraying himself as making a principled stand, warning the world about a President he sees as ‘unfit for office.’ Bolton’s critics see things quite differently.  South Korea is calling what he wrote in his tome, lies.  And before he announced he was going to publish a hit job on the President, the Democrats and the liberal mainstream media called BS on John Bolton himself. Bolton’s new book

Four people who were in the meeting where Bolton claimed Trump asked the Chinese to help him win the election say that the former National Security Advisor is lying. They are Secretary of State Mike Pompeo, Director of Trade and Manufacturing Policy, Peter Navarro, U.S. Trade Representative Robert Lighthizer, and former White House Chief of Staff Mick Mulvaney.

Even the judge who let the book go forward on Saturday had some harsh words for him.

“Defendant Bolton has gambled with the national security of the United States. He has exposed his country to harm and himself to civil (and potentially criminal) liability,” Judge Royce Lamberth said in a ruling. “But these facts do not control the motion before the Court. The government has failed to establish that an injunction will prevent irreparable harm.”

Now other world leaders are weighing in on Bolton’s ‘tell-all.’ South Korea, for one, was NOT impressed by the fact that Bolton exploited his unique access to diplomatic conversations to pad his own bank account and settle scores.

Worse still, South Korea is straight-up, calling him a liar.

The book includes details of the ill-fated summit in Hanoi, Vietnam—the third meeting between the two leaders which fell apart with the two sides unable to reach a deal on sanctions relief and denuclearization.

The embarrassing collapse of the summit marked the start of a new cycle of deteriorating relations between Pyongyang, Seoul, and Washington, D.C.

In the book, Bolton alleges that South Korean President Moon Jae-in had pushed an unrealistic “unification” agenda during talks between the three nations, only to be disappointed by the eventual lack of progress.

Chung did not detail which parts of the book were inaccurate, but said its publication had set a “dangerous precedent.” He added, “Unilaterally publishing consultations made based on mutual trust violates the basic principles of diplomacy and could severely damage future negotiations.

It shouldn’t surprise us that he was caught in a lie.

Another of his more salacious claims (one that was cited in the promotion of the book) is pretty easily refuted. It was the claim that Xi and Trump talked about the Uyghur concentration camps, with Trump speaking approvingly of them.

Xi has never publicly admitted to any such concentration camps. And, the conversation Bolton described did not happen in his presence but was actually hearsay (he claims it was told him by an interpreter) his story should be taken with a ton of salt.

Per KT McFarland, who was part of Trump’s national security staff under General Flynn:

Bolton and Trump clashed from the beginning – not just over policy, but in style and temperament. Bolton pushed for preemptive military action against Iran, Syria, Venezuela, and North Korea. When the president took a different course, Bolton took to the phone. He became the “anonymous source” for reporters, dishing out tales of White House chaos and presidential incompetence.

(…)I heard from several of my former NSC colleagues who remained at the White House after I left that Bolton spent most of his time – when he wasn’t in the Oval Office – sitting in his office behind closed doors. His staff wasn’t sure what he did for those hours on end. Now we know – he was, in all likelihood, turning his copious notes into a manuscript, presumably in anticipation of getting a lucrative book deal, and rushing it into print quickly when the inevitable happened and he was fired.

Before he decided to create lies about the President who gave him a second chance, the Democrats and the mainstream media thought John Bolton was as credible as a $3 bill.

In the end, Bolton’s book is caustic impeachment of John Bolton’s career and his scrupulousness–no one will trust him to be a member of their team, be it a political job or even as a commentator.  After his book tour is over, Bolton will move on to the obscurity he so richly earned.