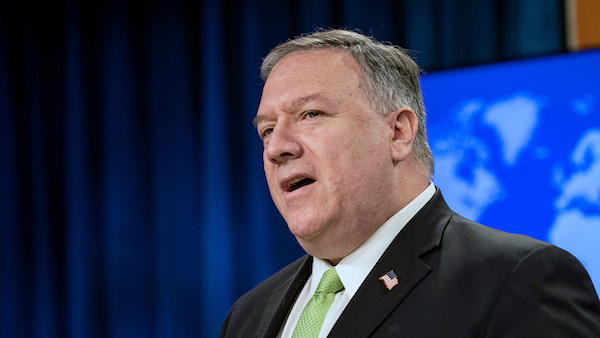 Bolton a liar
Secretary of State Mike Pompeo issued the following statement about John Bolton and his salacious book published under the title of “I Was In The Room Too.”

I’ve not read the book, but from the excerpts I’ve seen published, John Bolton is spreading a number of lies, fully-spun half-truths, and outright falsehoods.  It is both sad and dangerous that John Bolton’s final public role is that of a traitor who damaged America by violating his sacred trust with its people.  To our friends around the world: you know that President Trump’s America is a force for good in the world.

Bolton’s tell-all book “The Room Where It Happened: A White House Memoir” is set to be released next week on June 23.

“I was in a staff meeting one time, [and] he walked in and he was absolutely giddy at the prospect of a coup in Venezuela,” Navarro told Fox. “It was, like, weird. And I’m thinking to myself, ‘Wait a minute, this is a serious, serious matter and he’s giddy.’”

“There’s something wrong with that dude.”

The reason for stopping the book per the Department of Justice and intelligence officials is that it still contains classified information that could hurt the country. They’ve for an emergency restraining order to halt the book’s release and called for the hearing to take place on Friday.

As National Security Advisor Bolton butted heads with the President because Trump was trying to pull America out of foreign wars and Bolton wanted to invade every country that looked at him funny.

One of Bolton’s claims was that during the 2019 G-20 Summit in Osaka, Japan, Trump beseeched Chinese President Xi Jinping to bolster his re-election prospects by buying American crops. Pompeo, Navarro, U.S. Trade Representative Robert Lighthizer, and former White House Chief of Staff Mick Mulvaney were all at that meeting and indicated that Bolton wasn’t telling the truth.

There is something wrong with a man who begged for a job, to get one more chance after being fired by Bush #43, gets the chance but alienates almost everyone in the administration including the President, so he’s let go. And then he writes a fictional account of his tenure when that President is running for re-election, just to get revenge for being fired, He’s proved to be disloyal to the President who gave him a shot but more importantly disloyal to the country he swore to serve.