‘Nothing’ Off The Table If GOP Forces Vote on SCOTUS Pick 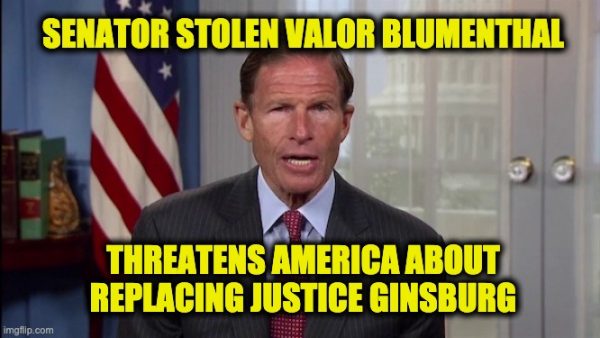 After the death of her good friend and fellow Justice, Antonin Scalia, when the Senate refused to vote on the nomination of Merrick Garland to the court, Justice Ruth Ginsburg publicly called on the Senate to go through with the nomination. In July 2016, she said, “That’s their job, here’s nothing in the Constitution that says the President stops being President in his last year.”

Ignoring her words, the radical left has completely lost its collective mind over fears that President Trump will pick someone to replace Supreme Court Justice Ruth Bader Ginsberg, who died Friday from complications arising from pancreatic cancer.

As Faye Higbee reported earlier, leftists, including a former CNN propagandist who actually ate brains and advocated the genocide of ALL Trump supporters, threatened even more violence if the seat was filled before Election Day.  Giving legitimacy to those threats while inciting violence was Sen. Richard “Stolen Valor” Blumenthal (D-CT). He issued a tweet that can only be seen as a threat of violence toward the American people.

“If Republicans recklessly & reprehensibly force a SCOTUS vote before the election—nothing is off the table,” he said on Twitter.

If Republicans recklessly & reprehensibly force a SCOTUS vote before the election—nothing is off the table.

I take this as a direct threat to the public. https://t.co/klNfOMzOPf

That’s because it IS a direct threat aimed at every single American.  The message is, frankly, as subtle as a sledgehammer.  He might as well be saying, “Nice country you have here, be a shame if something happened to it.”

Violence and threats of violence seem to be the Democrats’ new go-to strategy, having failed in almost every other way.  Now, they are simply putting a gun to every American, telling us in so many words, “Vote for Biden or the country gets it.”

That’s rich coming from a democrat who supports BLM burning down our cities.

“Elections have consequences, and at the end of the day, I won.” – President Obama to House Republican Whip Eric Cantor, January 23, 2009.

Unlike the remarkable restraint Dems displayed during the Kavanaugh confirmation, right Senator?

Despite the threats of violence from the left, President Trump said he would quite likely announce his pick to replace Ginsburg next week.

When asked if he would choose a woman to replace Ginsburg, after she died on Friday, Trump replied, that it was “most likely.”

“I could see most likely it would be a woman,” he said. “Yeah… I would say that a woman would be in first place, the choice of a woman would certainly be appropriate.”

The president reminded reporters that he had a shortlist of potential nominees.

“I’ve gotten to know many of them. From a legal standpoint, from a sophisticated understanding of the law, from a constitutional standpoint, I think it’s the greatest list ever assembled,” he said.

Indeed, the stakes in the November election have grown even higher.  It now appears liberals, including elected officials who should know better, are ready, willing, and able to push America to a second bloody civil war.