And Exposes What The CT Senator Thinks About The Constitution 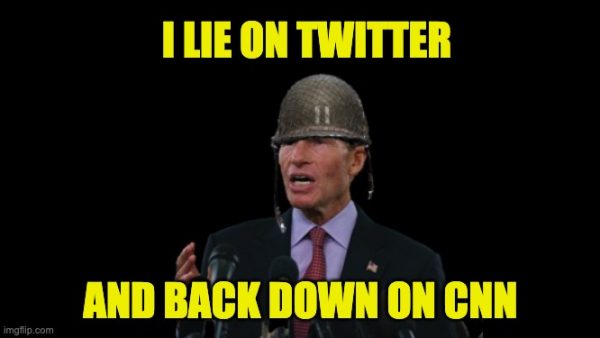 On Saturday, Sen. “Stolen Valor” Blumenthal (D-CT) was confronted on CNN about his outrageous tweet calling the nomination of Amy Coney Barrett to the Supreme Court “illegitimate” and Illegal. Soon after the President made his nomination announcement  Blumenthal tweeted that the nomination was just like his Vietnam service, he said it was “illegitimate sham.”

I will oppose the confirmation of Judge Amy Coney Barrett, as I would any nominee proposed as part of this illegitimate sham process, barely one month before an election as Americans are already casting their votes. Americans deserve a voice in this hugely consequential decision.

He went on to make the false charge that Judge Barrett would take away coverage of pre-existing conditions Which is a lie. The President already signed an executive order saying that he has already agreed with the states seeking to overturn Obamacare that  “access to health insurance despite underlying health conditions should be maintained, even if the Supreme Court invalidates the unconstitutional, and largely harmful, ACA,” and  added, ” It has been and will continue to be the policy of the United States to give Americans seeking healthcare more choice, lower costs, and better care and to ensure that Americans with pre-existing conditions can obtain the insurance of their choice at affordable rates.”

In other words, no one is going to touch coverage for pre-existing conditions.

I will refuse to treat this process as legitimate & will not meet with Judge Amy Coney Barrett.

On Saturday the Senator who lied about serving as a combat soldier in Vietnam was interviewed on CNN by Wolf Blitzer. Blitzer asked Blumenthal to explain why the nomination was “illegitimate” and a “sham.”

Blumenthal answered, “Illegal it may be not under the Constitution, Under the norms and traditions and unwritten rules of the Senate, it is illegitimate.”

Ah…the unwritten rules. Those are worth almost as much as the paper they were written on.

“What I hear you saying, Sen. Blumenthal, it may be inappropriate, it may be wrong — especially so close to an election — but you agree that there’s nothing illegal or totally illegitimate as to what they’re doing,”

And that folks is the difference between an originalist Justice like Antonin Scalia was or Amy Coney Barrett will be and what liberals like stolen valor Blumenthal want on the court. There is no “spirit of the Constitution. or as the great Justice Scalia said in a speech in 1996:

The theory of originalism treats a constitution like a statute and gives it the meaning that its words were understood to bear at the time they were promulgated. You will sometimes hear it described as the theory of original intent. You will never hear me refer to original intent, because as I say I am first of all a textualist, and secondly an originalist. If you are a textualist, you don’t care about the intent, and I don’t care if the framers of the Constitution had some secret meaning in mind when they adopted its words. I take the words as they were promulgated to the people of the United States, and what is the fairly understood meaning of those words.

Below is the relevant part of Senator Stolen Valor’s CNN interview.