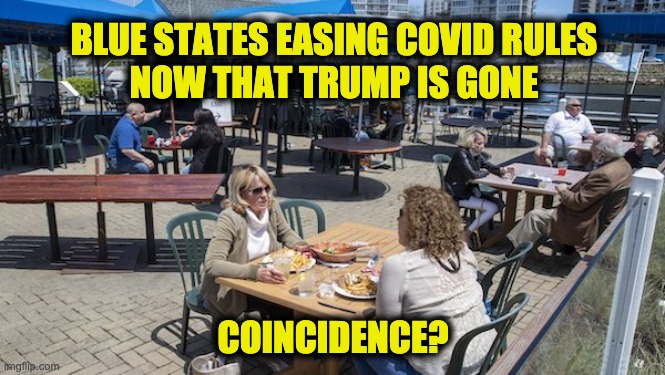 During the 2020 campaign, some claimed that some blue states were not removing their COVID restrictions because they didn’t want to help the economy while Trump was POTUS. After all, Florida opened months ago, and its COVID rate per thousand is lower than New York or California per the CDC. The claim about loosening restrictions seems to be true because, within days of Joe Biden’s inauguration, some blue states with the strictest COVID rules have begun to ease their restrictions

A surprising number of mostly blue states and cities have announced a return to indoor dining less than one week after President Biden’s inauguration. “Millions of jobs have been lost,” Biden lamented during his inaugural speech. “Hundreds of thousands of businesses closed.”

Some of the hardest-hit have been restaurants and bars, with restrictions or flat-out lockdowns being imposed on those businesses since March of last year.

Many have been put out of business, never to return.

That's what happens when blue states around the country keep their states locked down and then suddenly decide it's time to open the week before Biden is inaugurated. It's a BOOM! It's a MIRACLE! No, it's just disgusting, abusive politics. https://t.co/ukfvwnhY6U

Many businesses were the victims of draconian measures put in place by Democrat politicians. But now, those same politicians are suddenly experiencing a change of heart.

Cuomo, who had micromanaged the pandemic response to extreme degrees – implementing curfews and even dictating what kinds of food were acceptable to eat when out at a bar – suddenly had an epiphany.

.@NYGovCuomo’s State of the State: "We simply cannot stay closed until the vaccine is at critical mass.” pic.twitter.com/JdOo23jSJe

A slew of other blue Democrat politicians has announced relaxing restrictions on restaurants and bars in the five days since President Biden was inaugurated.

JUST IN: Multiple sources tell me Governor Newsom will lift the stay at home order on all regions in California tomorrow.

All counties will go back to the tier system, sources say. Most will return to the purple tier— allowing the reopening of outdoor dining, indoor salons.

Has the ‘science’ suddenly changed? Is this simply a response to the vaccine created under the guidance of the Trump administration being distributed?

Or is there something else going on here?

The average daily death rates in the United States are actually higher than they were back in April and May of 2020 when many of these businesses were initially shut down.

And while cases are on the decline of late, the New York Times reports that new strains of the coronavirus “could erase progress.”

Seems like Democrats would want to remain cautious rather than plowing ahead with reopenings.

Don’t get me wrong, I’d prefer the economy be opened back up to full capacity. Still, Democrats and the media insisted under President Trump that any suggestion of opening up businesses meant you wanted to kill seniors and children. Of course, most of those Democrats and MSM have let angry Andy Cuomo’s senior massacre off the hook.

MSNBC’s Joe Scarborough at one point accused Republicans seeking to rescue the American economy of wanting to “euthanize” senior citizens. But it’s Joe Scarborough, a man who donated his brain to science but forgot to tell them to wait till after he died.

“They [Republicans] want to make sure that people that own businesses in their district or in their states will keep giving them campaign contributions,” Scarborough claimed.

“I grew up in a Baptist Church and I heard a lot about abortion on the front end of life and euthanizing seniors on the other side of life,” he continued. “That is killing.”

Anybody care to ask him how he feels about Democrats suddenly becoming the party that wants to see businesses opened back up under President Biden’s reBama administration when they insisted on keeping them shackled under President Trump?  Nah. We’re talking about the guy who switched political parties because Donald Trump made fun of the married woman he was having an affair with (now his wife).