Was It Lousy Reporting Or Another Example Of The Biased Liberal Media Trying To Sabotage The Candidacy Of A Republican? 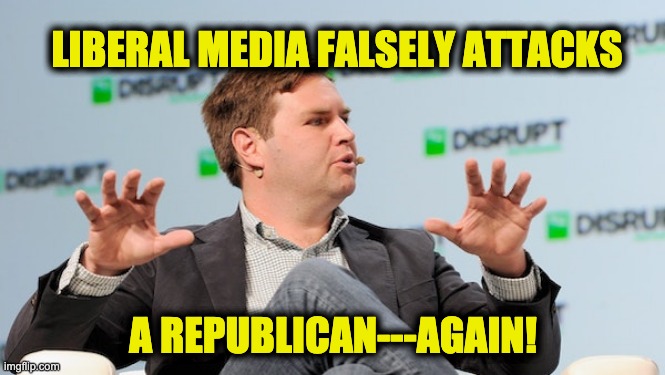 Venture capitalist novelist and possible 2022 GOP candidate for U.S. Senator from Ohio  J.D. Vance was lied about by Bloomberg News. Then he received a non-apology apology. Was it lousy reporting or another liberal media outlet trying to destroy the possible candidacy of a Republican–just like 60 Minutes did with Florida Governor DeSantis?

Vance, who wrote the popular book Hillbilly Elegy, reports that he decided to quit the board of directors of Kentucky green energy company AppHarvest. But after he resigned, the left-wing media began pushing the fake news tale that he left the board under a cloud because of tweets he made.  Bloomberg reported  (the text in bold is the story’s headline):

JD Vance, the author of the best-selling Hillbilly Elegy, has exited the board of directors of AppHarvest, according to an emailed statement from the $1.6 billion indoor agriculture company.

The newly public Kentucky firm announced Vance’s departure in response to a Bloomberg News inquiry about some of Vance’s recent statements. On Twitter, he’d written that taxes should be raised on businesses that oppose a new spate of state-level voting restrictions.

This claim that he was forced out is a provable lie.

Bloomberg claimed that Vance was forced out because he posted “controversial tweets,” which had prompted Bloomberg to ask AppHarvest to account for Vance’s tweets. But this is false. Vance did post tweets leftists might find “controversial,” but they were posted after he left the company:

At this very moment there are companies (big and small) paying good wages to American workers, investing in their communities, and making it easier for American families. Cut their taxes. No more subsidies to the anti-American business class.

Vance finally went to Twitter to describe how the left-wing media lied about the situation.

This is how too many in our press operate, and it’s why the media is one of the least trusted institutions in society: gin up a story, run it without proper sourcing, and let it run through multiple outlets. To everyone that’s run this lie: please do your stealth edits.

The reporter behind the Bloomberg version of the story, Deena Shanker, took a step back from her story…sort of:

As a great man once said, when I’m wrong, I say I’m wrong.

I deleted a few tweets because they included information that we later corrected in our story. Below are links to the current version and the follow-up. I sincerely regret the error.https://t.co/7qaH4HJKfVhttps://t.co/GPArP5mqG5

JD Vance, the author of the best-selling “Hillbilly Elegy,” said he chose to resign from the board of an agriculture startup due to his political ambitions, disputing the notion he had been forced out.

Vance, who recently vacated his seat on AppHarvest’s board of directors, said on Twitter he began talking with members of the board about stepping down last month as he considered a political run.

“The basic thinking was: I’m going to keep speaking my mind, and I’d rather do that unconstrained by the demands of a public board. And I thought the company would be better off too,” he said in a series of Friday tweets.

Deena Shanker’s original Bloomberg story was bogus. Then despite her tweet saying she was incorrect, her follow-up story didn’t contain a correction. It only said that Vance disagreed with the original story. Both the first story and follow-up were examples of lousy reporting—either that or another example of the biased liberal media trying to sabotage the candidacy of a Republican.