Billionaire Should Quit Race To Have Foot Surgically Removed From Mouth 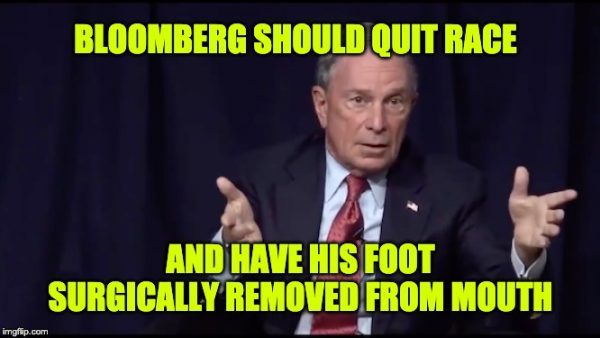 Former New York City mayor and Democratic Party “great moderate hope” Michael Bloomberg is a misanthrope. Revelations during the past week have shown he doesn’t like African Americans, women, people of faith, and well…anyone who isn’t Michael Bloomberg. Over the weekend another Bloomberg statement was outed, adding to the list of people he looks down upon—farmers. Farmers are a unique and critical part of the American culture and economy. But Bloomberg believes they are stupid dolts.

Bloomberg seems as if he’s never even seen a farm. He speaks so condescendingly about something he obviously knows nothing about, well, that seems a curious way to win the hearts and minds of voters.

Or does he only imagine himself as the leader of big cities and is only willing to represent their interests? In “The Portable Bloomberg: The Wit and Wisdom of Michael Bloomberg” put together by his employees in 1990, they do quote Bloomberg as saying “There are certain states you don’t go to.” and “We live in Manhattan so we don’t have to go anyplace else.”

Now we know what he meant, here he is, waxing philosophical on farmers a couple of weeks after Trump was elected. H/T Clash Daily In a clip from his November 2016 talk at the Saïd Business School of the University of Oxford in England, Bloomberg said:

“I could teach anybody, even people in this room, to be a farmer. It’s a process. You dig a hole, you put a seed in, you put dirt on top, add water, up comes the corn.”Now comes the information economy, and the information economy is fundamentally different because it’s built around replacing people with technology,” Bloomberg added. “And the skillsets that you have to learn are how to think and analyze.”That is a whole degree level different. You have to have a different skillset, you have to have a lot more grey matter.”

Bloomberg on why farmers can’t work in information technology

And on the eighth day, God looked down on his planned paradise and said, “I need a caretaker.” So God made a farmer.

God said, “I need somebody willing to get up before dawn, milk cows, work all day in the field, milk cows again, eat supper, then go to town and stay past midnight at a meeting of the school board.” So God made a farmer.

God said, “I need somebody willing to sit up all night with a newborn colt and watch it die, then dry his eyes and say,’ Maybe next year,’ I need somebody who can shape an ax handle from an ash tree, shoe a horse with hunk of car tire, who can make a harness out haywire, feed sacks and shoe scraps. Who, during planting time and harvest season will finish his 40-hour week by Tuesday noon and then, paining from tractor back, put in another 72 hours.” So God made the farmer.

God said, “I need somebody strong enough to clear trees and heave bales, yet gentle enough to yean lambs and wean pigs and tend the pink-comb pullets, who will stop his mower for an hour to splint the leg of a meadowlark.” It had to be somebody who’d plow deep and straight and not cut corners. Somebody to seed, weed, feed, breed, and brake, and disk, and plow, and plant, and tie the fleece and strain the milk,. Somebody who’d bale a family together with the soft, strong bonds of sharing, who would laugh, and then sigh and then reply with smiling eyes when his son says that he wants to spend his life doing what Dad does.  So God made a farmer.

Bloomberg is just an arrogant ass. Watch the Paul Harvey video below: