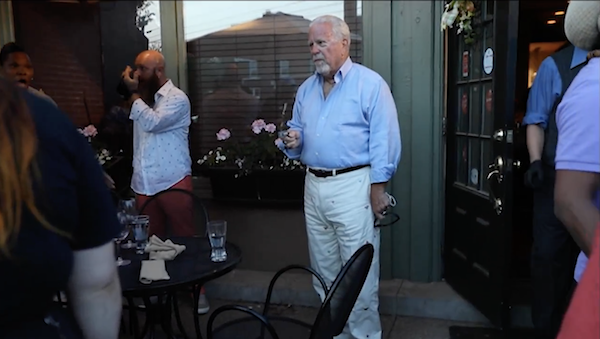 One armed diner in Louisville, KY, just wasn’t having an interruption by BLM protesters who disturbed his peaceful lunch. It turned out that several of the BLM protesters were also armed, which created a snarl for local police. The protests were supposedly about the Breonna Taylor incident from last year. They appeared to want to shut down the Kentucky Derby. (it didn’t work.)

For those who have asked, yes this man appeared to be armed, as were a few protesters. It was a tense few minutes. #Louisville pic.twitter.com/BAw7r99KMf

One Twitter user stated: “Americans Have Had Enough Of The Antifa And BLM Bullies. BRAVO to this gentleman with the gun.”

It is unclear what caliber the tiny gun was, but those particular frames come in several different ones from .22 to .45. No one wanted to find out the hard way, as several protesters and patrons attempted to de-escalate the situation.

Protesters marched outside Churchill Downs ahead of the 147th Kentucky Derby in Louisville Saturday.

People carried signs with messages that included, “We haven’t forgotten Breonna,” “No Justice, No Peace,” and “No Justice, No Derby.” Black Lives Matter Louisville, Black Market KY, Color of Change and UltraViolet commissioned a plane banner that flew over Churchill Downs with the message, “Protect Black Women. Divest from Police,” the Louisville Courier-Journal reported.

Louisville Metro Police Department shared a livestream on Facebook of their protest response. Video showed protesters surrounding and shouting profanities at officers making an arrest. At least one individual was seen waving a Black Lives Matter banner. A female voice narrating the video said officers were surrounded while making an arrest on a woman who refused to stand and walk on her own.

At least five protest-related arrests were made Saturday…

…One woman gave officers a short foot chase down the block after fleeing officers who tried to detain her. A man was charged with possession of a handgun by a convicted felon and first-degree wanton endangerment of an officer. He was arrested after an officer allegedly spotted open alcohol containers and a loaded handgun in the front seat of his vehicle.

Protesters refused to stay on the sidewalk and blocked several streets, and police made some arrests after multiple warnings. Violent crime has spiked in Louisville after the death of Breonna Taylor, and approximately 15% of the police department left at that time. In the usual Obama/Biden methodology, AG Garland Merrick has launched an investigation into the Louisville police department over the Breonna Taylor incident.
An armed diner could just be the beginning of a backlash against BLM.
vv
Cross-posted with Conservative Firing Line
hh
Facebook Twitter Flipboard