Blinken Makes A Mess Of Both China AND Iran 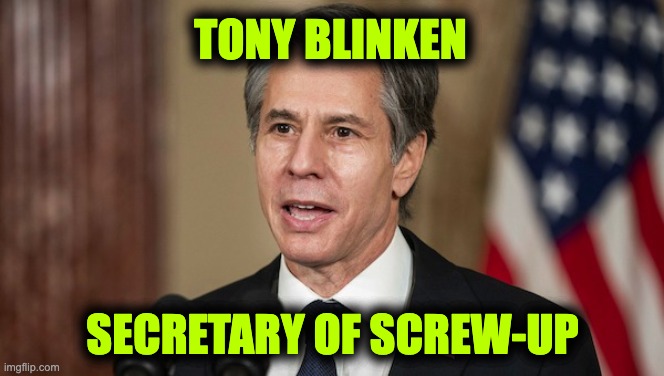 Not only did Team Biden make a colossal mess of Afghanistan, but now they’re walking the razor’s edge with both China AND with Iran.

So much for that Biden promise of bringing America’s endless wars to a screeching halt. After all that big talk about rebooting the JCPOA, Blinken is already talking about the possibility of conflict going hot with Iran if they don’t break off their pursuit of nuclear objectives and return to the negotiating table.

Here’s Blinken saying ‘every option is on the table as it should be:

IRAN DEAL LATEST: Secretary of State @SecBlinken doesn't rule out military action if Iran "is not prepared to engage quickly in good faith" when it comes to the JCPOA nuclear deal.

"As we always say, every option is on the table," Blinken tells @margbrennan pic.twitter.com/WDiaROCCYm

But if his goal was to limit Iran’s nuclear program… maybe removing sanctions on Iran’s ballistic missile program wasn’t exactly the brightest idea ever to come out of DC.

A group of 33 Republican lawmakers launched an investigation on Thursday into the Biden administration’s decision to remove sanctions earlier this month on entities tied to Iran’s illicit ballistic missile program.

Congressional Republicans suspect the Biden Treasury Department’s decision is part of a package of concessions meant to entice Iran into resuming negotiations aimed at securing a return to the nuclear deal—though senior U.S. officials dispute this claim, saying that the sanctions were removed following an internal legal review. Diplomatic talks with Iran have stalled since the regime inaugurated a new hardline president, Ebrahim Raisi, who demanded America drop all sanctions on the regime before discussions continue. The Biden administration’s Iran envoy, Robert Malley, said last week that the United States is “prepared to remove all of the sanctions that were imposed by the Trump administration.”

Antony Blinken and Chinese Foreign Minister Wang Yi locked horns over Taiwan on the sidelines of a Group of 20 summit in an ‘exceptionally candid’ meeting on Sunday.

The senior officials traded warnings against moves that could further escalate tensions across the Taiwan Strait.

…Speaking on the 50th anniversary of UN General Assembly recognizing the Chinese Communist Party’s mainland government as the ‘only legitimate representative of China’ and booting out the former government that was operating out of Taipei, Blinken called the little island a ‘democratic success story.’

‘Taiwan’s exclusion undermines the important work of the UN and its related bodies, all of which stand to benefit greatly from its contributions,’ he said in a statement.

China responded by saying Taiwan has no place in the international body.

‘The United Nations is an international governmental organization composed of sovereign states,’ the spokesman of China’s Taiwan Affairs Office said. ‘Taiwan is a part of China.’

Xi has openly talked about seizing control of Taiwan sooner rather than later in his speech on the 100th anniversary of China’s Communist Party. CCP To Chinese Churches: Teach Xi’s Speeches Or Get Shut Down

Memri showed some uncomfortable differences between the speech as it was delivered by Xi to his Chinese-speaking audience and the ‘sanitized’ version in the official translation of the speech as presented to the world.

Chinese translators conveniently left out the more bellicose parts, such as (bold and underlined parts were omitted)…

“Resolving the Taiwan question and realizing China’s complete reunification is an historic mission and an unshakable commitment of the Communist Party of China. It is also a shared aspiration of all the sons and daughters of the Chinese nation. We will uphold the one-China principle and the 1992 Consensus, and advance peaceful national reunification. All of us, compatriots on both sides of the Taiwan Strait, must come together and move forward in unison. We must take resolute action to smash any attempt toward “Taiwan independence,” and work together to create a bright future for national rejuvenation. No one should underestimate the firm resolve, the strong will, and the formidable capacity of the Chinese people to defend their national sovereignty and territorial integrity.”

Right out of the gate, Blinken projected weakness, not just in Afghanistan but in his first meeting with the Chinese foreign minister in Alaska. \

Would China have been so bold if a certain Bad Orange Man were still in office? Or would they be afraid of Trump convincing the world to agree that firing a single shot at Taiwan would result in some sort of an action that would be certain to get their attention…

…say the immediate cancellation of every debt owed to China or any Chinese entity by every country in the world?

You can remind everyone of how a certain New York real estate mogul turned reality TV star Made America Great Again in four short years with Christmas Cards with a choice of two very special messages… the classic, “Miss Me Yet?” or the new fan-favorite, “Let’s Go, Brandon!”