Who Died And Made Her Queen? 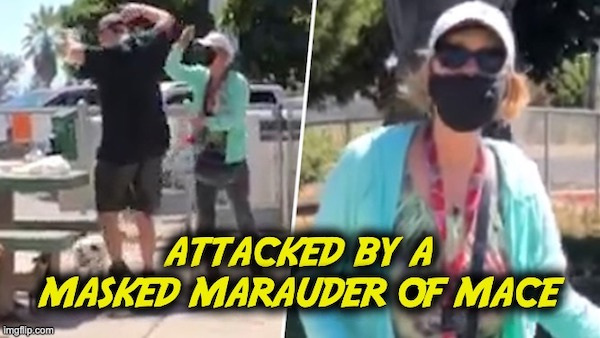 A couple was eating food at Dusty Rhodes Dog Park in Ocean Beach Thursday afternoon with their three-month-old puppy. They sat at a picnic table and began enjoying a meal when a woman reportedly confronted them for not wearing facial coverings and eating at the park where there is a no food policy and proceeded to blast both the couple AND their food with Mace

This macing sure sounds like assault, don’t you think? Our society has officially gone off the deep end on this one.

Whatever the original intent might have been, this mace lady was way over the line.  It’s equivalent to seeing whether the other guy is wearing your team’s Jersey to a home game.

Oh, he’s cheering for the cross-town rivals, is he? Get him! Only instead of some drunken frat boys punking you, it’s an overbearing middle-aged chick with a can of mace and an overdeveloped sense of entitlement.

“If we knew there was a no food policy, we wouldn’t have brought it into the park,” said O’Brien. “The lady who maced him automatically started saying stuff about us not wearing a mask when we were social distancing; there was no one near us.” ‘We were not wearing masks because we were eating. You can’t wear a mask and eat at the same time,’ wrote O’Brien in a Facebook post.

‘Then she started saying more stuff and I told her to leave the park and stop harassing us.’

O’Brien said the woman then approached the table the couple was eating at and without warning aimed the pepper spray.

‘She then came right up to our table where we were eating, pointed the mace at me first and got a little on me, and then my husband stepped in and took the entire can,’ wrote O’Brien.

The couple drove to the hospital for Kelley to receive medical treatment afterward.

Now, they want the woman to face jail time and have filed a misdemeanor battery report with the local police department.

‘I want her to go to jail, she assaulted my husband, and I’m angry about it,’ O’Brien told ABC 10

What kind of a self-important harridan do you have to be to walk up to someone minding their own business and hitting them with something that will require medical treatment? Who died and made her queen? And how little regard must she have for the lives and wellbeing of strangers?

Here’s a video of the incident.