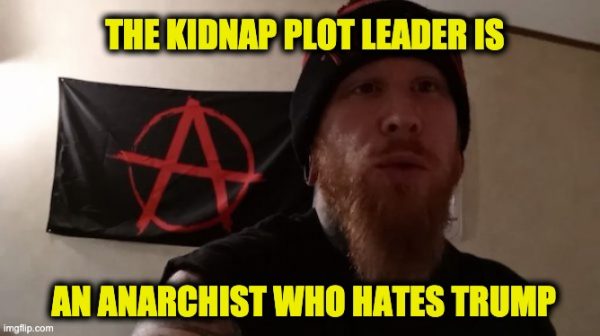 While Democrats—including Michigan Gov. Gretchen Whitmer—raced to attach blame to President Donald Trump for the alleged plot by so-called “militia” members to kidnap the governor and take over the state government, there could be one major fly in the proverbial ointment, it doesn’t come close to the truth. Blame Trump Narrative

The NY Post reports that one of the leaders of the plot apparently is shown in a video calling Trump a “tyrant.” And he’s not a “white supremacist as described in the media, he is an Anarchist.

Suspect Brandon Caserta declares in the video, “Trump is not your friend, dude.” The video was posted on  Twitter.

Wow! This is big. Brandon Caserta, one of the ringleaders of the group of men arrested for a plot where the group planned to kidnap Gov. Gretchen Whitmer hated President Trump too!

"Trump is not your friend dude"

He says that Trump is "a tyrant" and describes him as an "enemy". pic.twitter.com/SgaGOW8cS5

Notice the flag behind him it’s an anarchist flag.  Antifa uses the same symbol.

The plot was smashed when the FBI arrested 13 members of the “Wolverine Watchmen,” reportedly an “anti-government extremist group,” according to the Washington Examiner. That newspaper noted Whitmer tried to link the Trump White House to the plot.

“We know every time that this White House identifies me or takes a shot at me, we see an increase in rhetoric online, violent rhetoric, and so there’s always a connection, and certainly it’s something that we’ve been watching. But this took it to a whole new level,” Whitmer told reporters.

So Whitmer is saying every time Trump takes a shot at you, the anarchists who hate him are motivated? Sorry Gov., but they hate him like you do. If they are motivated, it would be to support you.

Democrat Joe Biden also released a statement condemning the “emboldened domestic terrorists,” the Washington Examiner reported. But we know Joe wouldn’t be able to follow that logic or any logic. Both Jim Crow Joe Biden and Whitmer both blamed Trump for inspiring the sick scheme because he fails to denounce white supremacy and extremism in the US. This indicates that neither one of them can understand English, as the POTUS has often denounced them. Well, either that or they are both liars. Considering that each of them are Democratic Party politicians, it is probably the latter.