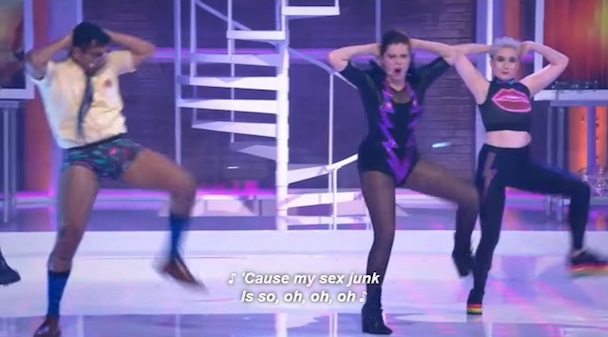 Bill Nye The Steve Martin lookalike contest winner turned “Science” Guy came back this year with a new Netflix series, humbly titled “Bill Nye Saves The World”  and one particular episode caused an uproar for parents on one side and transgender people on the other. Now we learn that this episode which relies on political correctness rather than science has been nominated for an Emmy” for a musical number called “My Sex Junk,” which suggests that sexuality exists on a spectrum.

Given that Nye is a die-hard liberal with a mechanical engineering degree who became a science guy because he created a character in a sketch comedy show, what would be more natural than to have the television personality teaching our children about the birds and the bees, right? After all he already claims to be an expert in climate science, religion, and social science (he believes that Jews have brought European antisemitism upon themselves).

The bow-tied buffoon covered probability in his new Netflix series using clips from his old broadcast television series “Bill Nye The Science Guy,”  taken from an episode also about probability.

The original airing of a segment on “gender selection” that ran on the old TV show explained:

“Inside each of ourselves are these things called chromosomes, and they control whether we become a boy or a girl,” the narrator explains. “There are only two possibilities: ‘XX,’ a girl, or ‘XY,’ a boy.”

That’s how I learned it in school.  But not how it was edited for Netflix.

But in the new version of his probability episode, Nye demonstrated that both sex and gender choice are non-binary.  That is to say that a person’s sex selection and the gender to which they identify, appear on a scale as opposed to in a check box labeled “male” or “female”.

But that’s not scientifically correct. Gender choice may be non binary, but normal sex selection is based on either XX or XY chromosomes. Gender is a social construct, not a scientific one, it may be caused by legitimate parts of people’s consciousness, and society may recognize a person’s gender selection– but it doesn’t change the fact that sex is based on DNA.

It’s a shame that Nye decided to cut the original version before delivering it to Netflix because the episode could have taught today’s kids something. The original version was the scientific truth sex is a genetic selection like eye color or baldness. In the case of sex it is determined by whether one has either XX or XY chromosomes. And for tyrants like Henry VIII who kept changing wives to get a son,  the parent who determines sex is the daddy (I can still blame my baldness on my Mom’s dad).

The most controversial part of the new segment is the part that was nominated for an Emmy–a song.

The song/music video that was nominated appears in the episode (and was taken off of you tube) is called “My Sex Junk.” It features actress Rachel Bloom singing a song about transgenders, gay sex and how sexuality is a fluid concept. Bloom’s song appears to lament the fact that humans are relegated to living lives as male or females.

Obviously the reason for the change of the segment has more to do with being politically correct than science. Which proves once again that Bill Nye doesn’t give a rat’s pitooey about science. Therefore while Nye is set up as some sort of climate science expert, remember his first concern are doing what is politically correct presenting true science. And now his non-scientific segment is being recognized by the TV academy.

Watch the Music video from Nye’s new version of the gender selection segment below.

NOTE: Parents should watch/evaluate the video below prior to sharing it with young children.