Americans Are A Silly People 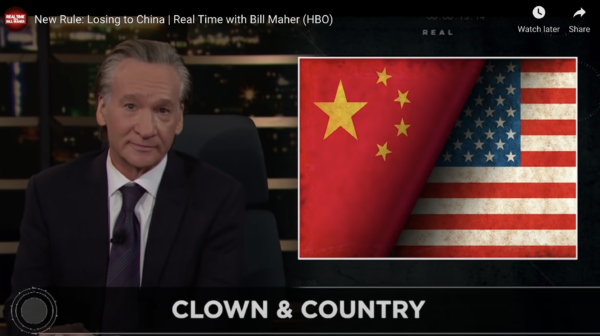 It seems as though the “woke” community may have jumped the shark, and they’re getting called out from a surprising place. The “woke” terminology, as far as anyone can really tell, was born of the concern of virtue signaling and added a twist:  Everything could be offensive to someone if you sought out that sort of thing.  The permeation of this idea into corporate culture (and pop culture as well) has stymied the growth of the American economic monster…at least according to Bill Maher, of all people.

“You’re not going to win the battle for the 21st century if you are a silly people. And Americans are a silly people,” Bill Maher said [paraphrasing a quote from the movie Lawrence of Arabia] during his monologue Friday night,

“Do you know who doesn’t care that there’s a stereotype of a Chinese man in a Dr. Seuss book? China. All 1.4 billion of them couldn’t give a crouching tiger flying f**k because they’re not a silly people. If anything, they are as serious as a prison fight.”

Maher used the bulk of the monologue to highlight the advancements China has made, though he acknowledged the authoritarian nature of the regime.

“There’s got to be something between an authoritarian government that tells everyone what to do and a representative government that can’t do anything at all,” he said, detailing that China has “built 500 entire cities from scratch, moved the majority of their huge population from poverty to the middle class, and mostly cornered the market in 5G and pharmaceuticals” in two generations.”

Then came the clincher.

“In China alone, they have 40,000 kilometers of high-speed rail. America has none. … We’ve been having Infrastructure Week every week since 2009 but we never do anything. Half the country is having a never-ending woke competition deciding whether Mr. Potato Head has a d— and the other half believes we have to stop the lizard people because they’re eating babies. We are a silly people,” he continued, referring to America as an “impacted colon of a country” in terms of moving legislation and getting things accomplished.

(…)There’s a progressive trend now to sacrifice merit for “equity.” Colleges are chucking the SAT and ACT test, and in New York, Mayor de Blasio announced merit would no longer decide who gets into the schools for advanced learners but rather a lottery system. You think China’s doing that — letting political correctness get in the way of nurturing their best and brightest? You think Chinese colleges are offering courses in the Philosophy of Star Trek, the Sociology of Seinfeld, and Surviving the Coming Zombie Apocalypse? Those are real and so is China and they are eating our lunch. And believe me, in an hour they’ll be hungry again.

Maher might just be right, and that’s not something we say very often.

Watch his entire rant in the video below: