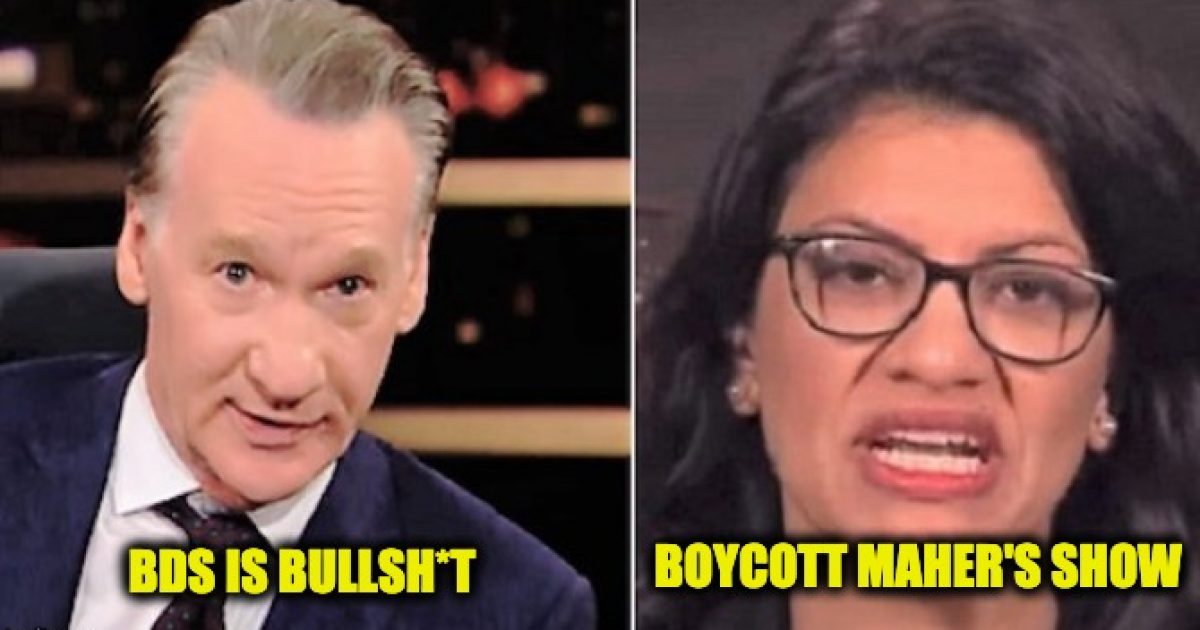 Wow! He nailed it! While talking about Israel blocking Reps. Tlaib and Omar being barred from entering Israel Bill Maher ripped the BDS movement.  Rep. Rashida Tlaib’s brain settings must be stuck on boycott because she responded by calling for a boycott of Maher’s show.

Friday night Maher began his show’s panel segment by asking if it was “fair” to boycott, divest, and sanction Israel in the wake of the clash between the Israeli government and the two pro-BDS members of Congress. His thee panelists danced around the question, so he decided to answer it himself.

It’s a bullsh*t purity test. BDS is a bullsh*t purity test by people who want to appear woke but actually slept through history class. It’s predicated on this notion, I think, that the Jews in Israel are mostly white, the Palestinians are browner, so they must be innocent and correct, and the Jews must be wrong. As if the occupation came right out of the blue, that this completely peaceful people found themselves occupied. Forget about the intifadas and the suicide bombings and the rockets and how many wars.

Let me read Omar Barghouti, is one of the co-founders of the movement. His quote. “No rational Palestinian … would ever accept a Jewish state in Palestine.” So that’s where that comes from, this movement, someone who doesn’t even want a Jewish state at all. Somehow this side never gets presented in the American media. I think it’s very odd.

Rashida Tlaib was not happy. She tweeted “Maybe folks should boycott his show,” said Tlaib, who went on to compare criticism of the BDS movement to the controversy surrounding boycotts of South Africa’s apartheid regime in the 1970s and 1980s.

Maybe folks should boycott his show.

I am tired of folks discrediting a form of speech that is centered on equality and freedom. This is exactly how they tried to discredit & stop the boycott to stand up against the apartheid in S. Africa. It didn't work then and it won't now. https://t.co/Oa49ZVfrVN

It’s kind of ironic that a woman who claims her opinion is being silenced by Israel want to silence Bill Maher’s opinion. But perhaps it’s not her fault, maybe some of her cranial circuits are stuck on the word boycott like a broken record. For those of you who are too young to know what a record is—well look it up, or ask an older person.

To adopt some of Maher’s language (something I rarely do) Tlaib’s claim of Israeli apartheid demonstrates she wants to appear woke but actually slept through history class.  Under Apartheid South African blacks were not permitted; to eat in white restaurants or cafes; to attend white schools or universities; to be treated in white hospitals; to live in white neighborhoods; to serve in the white government or judiciary. No such segregation exists in Israel.

Israel’s Arab citizens are full citizens. They attend of all Israel’s major universities. They are treated in all of Israel’s hospitals. They serve in government and the judiciary. They are welcome in all of Israel’s restaurants and cafés. In Israel Jews and Arabs live as full equals. The claim of Apartheid is as Bill Maher might say, bullsh*t

Indeed, Palestinians in Judea, Samaria, and Gaza are not citizens of Israel. But it’s because they don’t want to be Israeli citizens. Some Palestinians would like to destroy Israel. Some believe there should be a Palestinian state alongside Israel, something Palestinian leadership has rejected twice. The answer is not for Israel to annex Judea, Samaria, and Gaza Bank to extend Israeli citizenship to their residents. The Arab world, the UN, and most Palestinians would have a conniption. The answer is for both sides to reach a peace deal. Israel has repeatedly offered to do precisely this. Sadly the Palestinian leadership has repeatedly rejected these offers, refuse to endorse Israel’s right to exist as a Jewish state, and still commits terrorist violence.

Rep. Tlaib’s comments about Apartheid and Bill Maher were just like her request to see her grandma and her rejection of Israel’s offer to make the visit–a political sideshow. And as Maher opined, it’s a sideshow that the media doesn’t cover correctly.