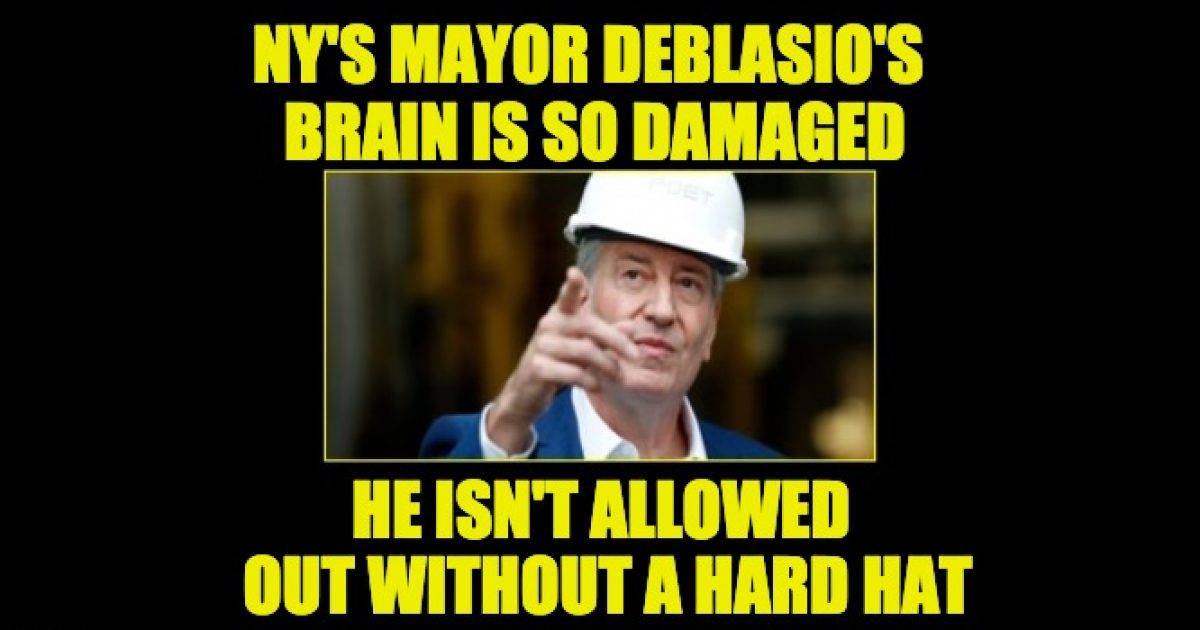 Is it because Bill DeBlasio is socialist and he is covering up for the left-wing or is it because he is an imbecile? Either way, the man is crazy!  NY Mayor Bill DeBlasio claimed at a hate crimes press conference on Tuesday that Antisemitism is a “right-wing movement.” He also rejected that any Jew-hatred is coming from the left.

“I think the ideological movement that is anti-Semitic is the right-wing movement,” de Blasio said at a Brooklyn press conference Tuesday about the increase of hate crimes in New York City. Hate crimes against all minority groups are up 64% compared to this time last year. Anti-Semitic incidents have spiked by 90%.

De Blasio said he did not agree with a claim by a reporter that there is also rising anti-Semitism “on the left in the BDS movement and around the world.” The Boycott, Divestment and Sanctions movement is a largely left-wing campaign to ban Israeli products.

“I want to be very, very clear, the violent threat, the threat that is ideological is very much from the right,” de Blasio said, adding that the perpetrators trace their history back to Nazism and fascism.

He was speaking specifically about national and international incidents.

Perhaps because he is a socialist he is covering up for the left-wing, either that or he is an imbecile

What do you call a government that is staunchly anti-capitalist and believed that the means of production in their society should be controlled by a centralized national government? What if the party that controlled government was called the National Socialist Workers’ Party. That socialist party was better known as the Nazi party.

Arguably the second most anti-Semitic government in the past century was Communist Russia.

After it became evident that Israel was pro-Western, Stalin grew under the suspicion that Soviet Jews were secretly working against the USSR. The importance of this event cannot be under-stressed, as it led to the complete dehumanization of the Soviet Jewry and propagated anti-Semitic feelings within Soviet society.

The communist Russian government was not seeking to annihilate the Jewish community like the Nazis just use them as a scapegoat. The regime systematically closed down synagogues and published a large number of anti-Semitic books, some of which accused Judaism of being a Nazilike religion. After the Six-Day war cartoons of Israeli General Moshe Dayan routinely appeared in Soviet newspapers showing him wearing an armband with the Nazi swastika. And when the Jews wanted to flee, the communists often imprisoned leaders of the Jewish prisoner of conscious movement. These prisoners of conscience became the new focus of the international Soviet-Jewish protest movement. After about two decades of international protests, Jews were allowed to leave en masse.

Does DeBlasio want more modern versions?  Sadly Antisemitism is a global problem today. But to make it easier for DeBlasio to understand I will give him examples from here in the United States and names he will most probably recognize. As an example, here’s a list of ten leftists/leftist movements who have promoted Antisemitism.

Not all leftists are anti-Semites, and not all right-wingers love Jews. In fact, until William F. Buckley threw anti-Semites like Pat Buchannan out of the mainstream conservative movement, the right wing was full of haters, but that was over a half-century ago.  And to be honest, there are some right-wing anti-Semites in America today.

But Bill DeBlasio’s claim that Antisemitism is solely from the right and absent from the left is either an attempt to cover up for his fellow socialists or proof he donated his brain to science and forgot to ask them to wait until he passed away.