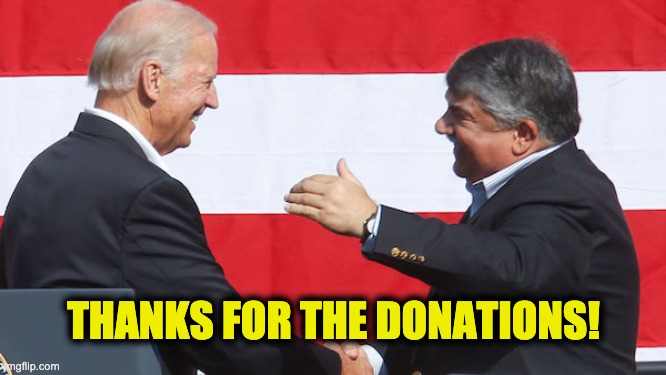 How often do we hear weepy outrage from AOC or some other Democrat about the dangerous influence of ‘dark money’ and how we need to get it out of politics? And some people are gullible enough to actually think they mean it.  big labor dark money

They love to trot out the Koch Brothers or the NRA as some kind of a financial juggernaut who can buy and sell elections by dropping money in the right places.

We can’t help but notice how they have nothing to say about Zuckerberg directing hundreds of millions into battleground states, not to help candidates, but to ‘invest’ in the GOTV vote of hand-picked Democrat ridings themselves with ‘strings attached’ donations that dictate how elections employees would run things.

The silence about Big Tech leading the pack in lobbying dollars in 2020 — even leaving Defence contractors like Lockheed and Boeing in their dust — tells you everything you need to know about which party they are propping up. GUESS WHO? Three Corps Outspend ALL Other Industries In Lobbying Dollars… Including Defense Tech

Those are just the obvious players in the power politics game of trading money for influence. Someone else has been quietly slipping under the radar—until now.

Unions have been empowered to collect mandatory dues from workers. And they are free to spend it on policies those same workers might absolutely oppose. Even the protections that prevent them from doing so have convenient ‘workarounds.’ And even if they get caught, who’s going to enforce any penalty?

A study from the National Institute for Labor Relations Research (NILRR) found $67 million in hidden political spending from unions in 2019 and 2020. Unions sent millions to liberal groups but classified the donations as charitable activities or grants—a loophole that allows them to bypass federal labor laws that protect workers from funding political causes they find objectionable.

Patrick Semmens, a spokesman for the National Right to Work Committee, said unions misclassify political spending because there are little to no consequences even if they are caught.

…The NILRR study found nearly $1.8 billion listed under “Political Spending and Lobbying” sections in federal labor filings from 2019 and 2020. The additional $67 million in misclassified political spending was listed in the “Representational Activities” and “Contributions, Gifts, and Grants” sections. Dissenting workers can pay partial dues to avoid funding union political activities, but that firewall does not apply to representational activities or other spending.

Federal labor filings show that major labor unions have sent millions of dollars in member and dissenter dues to political nonprofits. The National Education Association, for example, sent more than $18 million to the Strategic Victory Fund, a progressive lobbying organization, and the State Engagement Fund, a left-wing 501(c)(4) advocacy organization—both of which focus on politics. The National Education Association, the largest teachers’ union in the country, did not respond to a request for comment.

It was this latter loophole through which nearly 80% of their donations were funneled into political spending. Sixteen percent of that $1.8 billion went to state and local races.

So much for ‘transparency.’

Despite the penalties for false reporting, LM-2 Schedule 16 activities are often underreported because union officials classify clearly political activities as “Schedule 15–Representational Activities” and “Schedule 17–Contributions, Gifts, and Grants.” Under the Labor-Management Reporting and Disclosure Act of 1959 (LMRDA), neither of these two schedules would be correct if the expenditure satisfies the Schedule 16 definition. The combined Schedule 15 & 17 disbursements to payees for the 2019-20 reporting period was $6,295,191,497.

Here are just a few examples of LM-2 disclosures that likely should have been reported as political spending, but were not:

The National Education Association union (NEA) gave $17,000,000 to the Strategic Victory Fund, a grassroots lobbying organization;
The Service Employees International Union (SEIU) gave $2,500,000 to THE FAIRNESS PROJECT, which describes its mission as “putting political power directly into the hands of voters…”;
The NEA gave $1,500,000 to the State Engagement Fund, a left-of-center 501(c)(4) advocacy organization.
These disbursements are clearly political, but they were not included in Schedule 16 spending. This is just one way the $1.4 billion reported in LM-2 filings may significantly understate union political spending. (At the end of this report is a longer, though hardly exhaustive, list of other examples of likely misclassification.)

This doesn’t even begin to account for other ways unions get politically active — like organizing volunteers for door-knocking drives.