Big Government Is The Faith For People Who Lost Their Religion 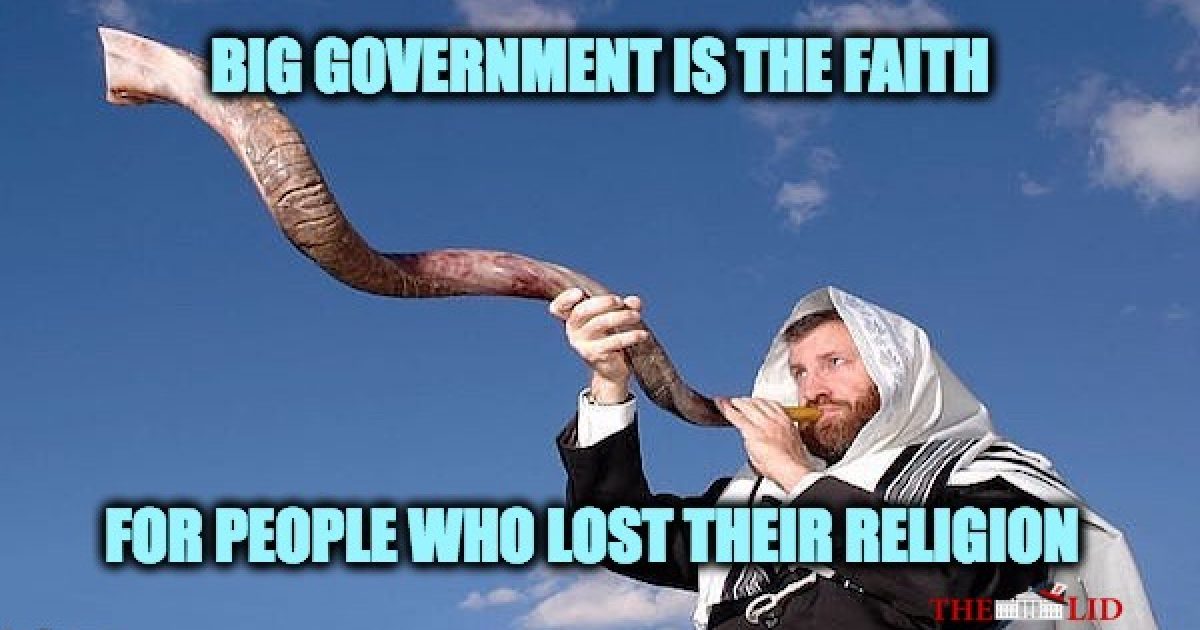 With the setting of the sun, this coming Wednesday (9/20) through Sunday, Jews across the world will begin the observance of the “Yomim Noraim “(Days of Awe), a ten-day period that is book-ended by the High Holy Days of Rosh Hashanah and Yom Kippur. What most people don’t realize (and what liberal Jews will not accept), The theme of the High Holidays is antithetical to the big government principals of liberalism and progressivism. So are the principals of other religions. One might say that big government is the faith for people who have lost their religion.

The Jewish High Holidays are all about personal responsibility. All the prayers and readings are just tools to help us look inward, formulate a personal accounting of our deeds over the past year, good and bad, and to understand what we have learned or need to learn to correct.

Even the method of atoning for our sins goes against progressive values. Jews are taught that our Maker is not a big massive government that will fix everything for us. For earthly type mistakes, we must first approach the people we harmed to request forgiveness and if necessary, make restitution to them. Then we must discover what led us to behave that way and correct the flaw catalyzing such behavior. Only then can we approach God for absolution.

It’s not that God cannot fix everything but his direct involvement would destroy the delicate balance he set up during creation.

The creation narrative in the book of Genesis explains that man is created in God’s image. With those words, the Torah is not teaching us that we are all dead ringers for the “big guy upstairs.” If that were the case, everyone’s driver’s license would have the same picture, the Sports Illustrated Swimsuit Issue would seem a bit creepy, and crimes would go unsolved due to the fact that eyewitness testimony would be useless, and everyone would have the same DNA.

The idea of being “created in God’s image” is supposed to teach us that just as God acts as a free being without prior restraint to do right and wrong, so does man. Our Maker performs “good” as a matter of his own free choice. And because we are created in his image man also has the opportunity to do the right thing as a matter of free choice. Only through free choice, can man truly be “in the image of God.”

That is why God created a world where both good and evil can operate freely. The Rabbis explain this when they said; “All is in the hands of Heaven except the fear of Heaven” (Talmud, Berachot 33b). In other words, God controls all the options we have, but it is up to man to pick between good and bad.

Sorry liberals, but free will is the divine version of limited government. God picks the winning direction but does not choose winners or losers. Neither does he interfere with the process of learning through repentance and understanding one’s actions. We are not divinely perfect nor are we meant to be. We are only supposed to be closer to that perfect divine-ness when we leave this world than when we entered it.

Because we all are created in God’s image we believe that all men are created equal. But this does not mean what progressives tell us, that when it comes to talents, looks, preferences, or natural abilities we are all equal. Nor does it mean we all should have the same health care, big screen TV, wireless Internet, cookies and cream ice cream, or savings account balance.

What is actually meant by “all men are created equal” is that we all have the same ability to be infinitely good or wicked; we all have the same ability to forge a relationship with God regardless of our intellectual capability, social background, physical strength, golf handicap wealth, etc. It’s kind of like the U.S. Army Commercials, “be all you can be.” During the High Holidays, we evaluate how well we have used the “lot we have been given” for good deeds and forging that heavenly relationship.

The Hebrew word for charity, “tzedaka,” has in its root the word “tzedek,” which means righteous, because we are taught that personally giving charity is one of the keys to being righteous. It is not a responsibility we are to abdicate to the government.

Some of the ancient sages have suggested when God created the world; sparks of his holiness were spread across the earth. Every time that a person makes the choice of performing a righteous act (such as giving charity) one of those sparks is purified and sent back to heaven. Through that process, we become closer to God.

The progressive Democrats and the nanny-statists of all political persuasion take away that choice. They believe that if the choice were to be left up to the individual, that individual would do the wrong thing. Therefore government needs to take an omnipotent God-like role and control our decisions.

People who support progressivism are rejecting the free will given to us by our maker when we were created in God’s image and hand it over to the government. Thus they are retarding our spiritual development, and as a result, canceling an opportunity to get closer to God. In a progressive society, the ten “Days of Awe” are not necessary; there is no introspection needed because the government makes their choices for them.

In an English dictionary, the word sin is defined as:

Any act regarded as such a transgression, esp. a willful or deliberate violation of some religious or moral principle.

There is no word in Hebrew matching that definition. Instead, the word used on Rosh Hashanah and Yom Kippur is the Hebrew word “chet”. It is an archery term referring to an arrow that “missed the target.” The person who missed the mark is considered to have made the mistake due to a lack of focus, concentration or skill. The purpose of the High Holidays is for each of us to determine why we missed the mark. The answer cannot come from someone else or from the government. It has to come from inside each person.

In the same vein, the Hebrew word commonly translated as repentance, “Teshuvah,” actually means return. In other words, we have returned to the correct path. The true meaning of the word is much more than just repentance, which implies simply feeling sorry for what you have done. Teshuvah involves changing what it is inside you that led you to go off-course, (a concept that many politicians should adopt).

The Rabbis tell us the only way to do “Teshuvah” is by undergoing personal reflection and personal choice (as opposed to governmental regulation). God gives us a roadmap in the Torah, Prophets, Psalms and other sacred texts; he even gave us coaches (Rabbis), but to truly change ourselves and ultimately to truly change the world, we have to discover for ourselves the best way to read the roadmap.

This is not only a Jewish idea; the Lid’s Official Catholicism Czar, Hot Air’s Ed Morrissey explained to me that there is a similar concept in his faith:

In Catholicism is the exhortation to maintain a “well-formed conscience” to gain awareness of sin and the need to repent. In Catholicism, that is accomplished by heeding both scripture and the magisterium (which means “teaching authority” and not royalty) of the Catholic Church.

In its purest form, the High Holiday period is the antithesis of the various forms of liberal and progressive government. We learn from the “Ten Days of Awe” that we must be honest with ourselves and rely on our own introspection to find the right path. We learn that while God may be evaluating the path we take, and he provides a roadmap to the right way, he does not nor will not make the decisions for us. We decide and we live with the consequences sometimes in this world, sometimes in the next. Judaism does not have the concept of hell unless of course, one counts Thanksgiving dinner with the ultra-liberal part of your family, or the third quarter of an AFC Championship game when the Jets blow a two-touchdown lead.

Progressive and leftist governments take free will away; they make the decisions, determine the path, eliminate the need for introspection and the opportunity for each one of us to find those sparks of God in the world. Progressive/liberal governments take from their citizens the greatest joy of all— finding for themselves the path that will draw them closer to God, and the feeling that closeness one gets with every mitzvah (good deed). That’s one reason why progressive governments believe that religion ends when one leaves the grounds of their house of worship. In their philosophy, it is the government who should set the path, not holy scriptures passed down from the deity. In their philosophy government is responsible for mandating our actions and fixing the consequences. That’s why the theme of Judaism’s Yomim Noraim (High Holidays) is antithetical to liberal and/or progressive political philosophy. We are responsible for our own actions, discovering what we did right or wrong, and living with the consequences.