Biden’s War On Free Speech Is Against Political Opposition Itself 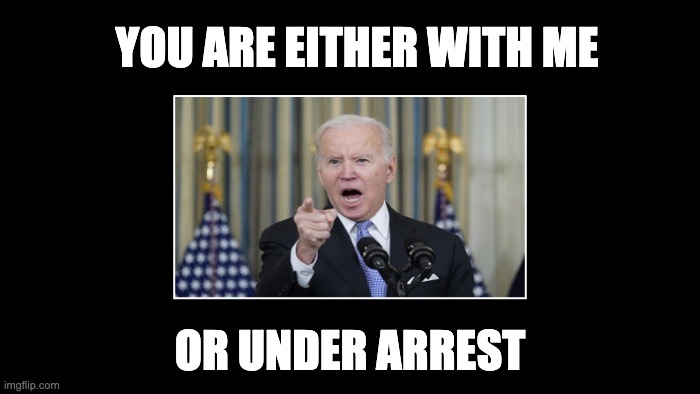 Whether it is the Justice Department suppressing the Hunter Biden laptop story before the election of President Joe Biden, or raiding the residence of former President Donald Trump because he’s still running for President and now targeting his top donors, or locking January 6, 2021 protesters up for more than a year, or using the Department of Homeland Security’s Cybersecurity and Infrastructure Security Agency to coordinate with social media to suppress opposition speech against Covid policies, election results and other supposed misinformation, the federal government and Big Tech are working together to squelch free speech and of the press every day.

Utilizing  H.R. 3359, passed by unanimous consent without debate right before the Republican-majority Congress of 2017-2018 adjourned, that authorizes the Secretary of Homeland Security and the Cybersecurity and Infrastructure Security Agency (CISA) to disseminate information to the private sector, including Big Tech social media companies in a bid to combat disinformation by potential foreign and domestic terrorists.

The law authorizes CISA to “disseminate, as appropriate, information analyzed by the Department within the Department, to other agencies of the Federal Government with responsibilities relating to homeland security, and to agencies of State and local governments and private sector entities with such responsibilities to assist in the deterrence, prevention, preemption of, or response to, terrorist attacks against the United States.”

The agency even brags about its “rapport” with Big Tech firms in censoring speech. Hence, they’re on the same page: “This activity leverages the rapport the MDM team has with the social media platforms to enable shared situational awareness.”

According to the agency, it began while Trump was still in office: “This activity began in 2018, supporting state and local election officials to mitigate disinformation about the time, place, and manner of voting.”

The Countering Foreign Influence Task Force (CFITF) existed under the Trump administration. CFITF was altered by the Biden administration in 2021 and officially changed its name to the Mis-, Dis-, and Malinformation (MDM) team.

And it was expanded in 2020: “For the 2020 election, CISA expanded the breadth of reporting to include other state and local officials and more social media platforms.”

In early May 2020, the agency issued disinformation warning against “potentially extremely harmful suggestions to drink bleach” after a controversial April 23, 2020 press conference by former President Donald Trump about the use of solar light and other disinfectants to kill Covid on surfaces when Trump proposed using solar light to treat the virus.

After the election, Democrats in Congress even managed to criminalize Trump’s questioning the results of the election, impeaching and charging him with incitement of insurrection. The single article of impeachment states the President “willfully made statements that, in context, encouraged — and foreseeably resulted in — lawless action at the Capitol.”

But at the Save America Rally on January 6, President Trump explicitly urged everyone to “peacefully” protest the Electoral College certification of Joe Biden as President-elect: “We have come to demand that Congress do the right thing and only count the electors who have been lawfully slated, lawfully slated. I know that everyone here will soon be marching over to the Capitol building to peacefully and patriotically make your voices heard.”

That’s First Amendment protected political speech. But now it’s chargeable, even if you’re the President. It wasn’t because he incited anything. It was because he was questioning the legitimacy of Biden.

This was one of the unfortunate outcomes of January 6, 2021, riot at the U.S. Capitol. And it was predictable. In fact, it was predicted that day by Americans for Limited Government President Rick Manning, who wrote in a statement: “violence begets violence, and any aggressive actions will be utilized by the radical left which will soon control the White House as an excuse to engage in draconian measures and to curtail liberties… [T]he truth is that the very same people who control the media, corporations, the legal system, and soon the White House and Congress who ignored violence against Trump supporters for more than four years will use any rioting at the Capitol as a proof point to prosecute anyone for supporting Donald Trump for President.”

That’s the root cause of the conflict right there. Until then, former President Trump had a Twitter account. Parler was a growing social media app. As fragile as it was, civil society, especially in cyberspace, was still somewhat functional. Afterward, the new Biden administration upgraded agency efforts at policing speech on the internet.

Ironically, and abusively, the same Justice Department and federal executive branch security agencies ran a five-year operation against former President Trump rife with misinformation about him being a Russian agent when that was not true. Trump declassified the documents that prove it, but the Justice Department refused to publish the redacted versions of those documents, so they were apparently declassified completely. Those documents belong to the American people, and we should all be allowed to publish them now, protected fully by the First Amendment, but instead, it’s a crime.

All this set the contours for Biden’s dark September 1 speech in Philadelphia, Pa., outlining the supposed “threat” to “the very foundations of our republic” posed by former President Donald Trump and the so-called Make America Great Again (MAGA) Republicans. This is an outright justification for all the actions to suppress the Trump-led opposition party, the Republicans, which is now running for Congress in the 2022 midterms.

Hours before that, White House Press Secretary Karine Jean-Pierre clarified what this means on September 1: “When you are not with where a majority of Americans are, then you know, that is extreme.”

Being in the opposition is not extreme. Depending on where you were born and the propensity of children to adopt the politics of their parents and spouses, it’s practically an accident of birth and/or marriage. In 2017, Democrats were in the opposition party. And the shoe will be on the other foot one day.

So, I suppose the American people have a choice in 2022. You can vote to censor Trump and Republicans, or you can vote to protect their speech. This is unconstitutional hateful censorship by a partisan administration, and if Democrats increase their majorities, it might be viewed as a pretext for escalation in that endeavor. Best not to find out.

Ironically, Biden’s Justice Department — the same one squelching the opposition on Biden’s behalf — issued a May 2021 memorandum on hate crimes that warned they “instill fear across entire communities and undermine the principles upon which our democracy stands.” We know.