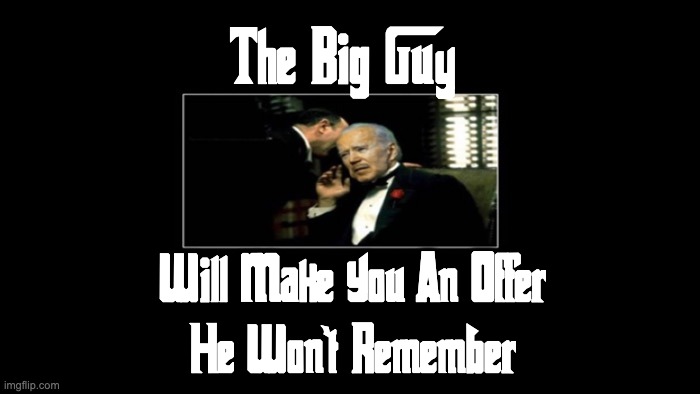 New incriminating emails have surfaced about Hunter. They are not from his recovered laptop, they do not involve drugs or prostitutes, yet they are STILL more damning than most of what we’ve previously seen.  Biden shakedown in Libya

They appear to be a smoking gun showing that everything we’ve been alleging about his role with Burisma wasn’t just plausible but part of a pattern of behavior involving other players as well.

If Dems thought the scandal surrounding Benghazi was a big problem to come out of Libya, Hunter Biden has a “hold my beer” moment for them. On second thought, his version might involve a crackpipe.

This one even involves an Obama donor in a pay-for-play scheme.

It’s going to be a little tricky for Democrats to discredit allegations that the Biden family has been exploiting their political connections for profit when Hunter himself was pitching his services to exploit his family connections to push the private agendas of people with money. For a price, of course.

What makes this email particularly problematic for team Biden was not only the explicit mention of a payout Hunter was to get if his lobbying was successful, but the influential connections Hunter himself claimed to have with … wait for it … key people among the Chinese Communist Party.

The first email, dated January 28, 2015, was sent from Sam Jauhari, a Democratic donor with businesses in the Persian Gulf, who was helping spearhead the Libya project. It was addressed to Sheikh Mohammed al-Rahbani, another Obama campaign donor involved in the proposal. In the email, Jauhari is frank about what Biden would bring to the table, and what he says Biden wanted in return:

Per phone conversation I met with #2 son. He wants $2 per year retainer +++ success fees. He wants to hire his own people – it can be close circle of people for confidentiality. His dad is deciding to run or not.

His positives are he is Chairman of UN World Food Program, son of #2 who has Libya file, access to State, Treasury, business partner SofS [Secretary of State] J. [John] Forbes K [Kerry] son and since he travels with dad he is connected everywhere in Europe and Asia where M. Q. [Muammar Qaddafi] and LIA [Libya Investment Authority] had money frozen. He said he has access to highest level in PRC [China], he can help there.

His negatives are that he is alcoholic, drug addict – kicked [out] of U.S. Army for cocaine, chasing low class hookers, constantly needs money-liquidity problems and many more headaches.

We should meet in Gstraad or London to decide next steps.

Certain Libyan assets were frozen, and the owners wanted it back. With Joe Biden still deciding about whether to run in 2016, securing this level of access with the son of the (would-be) President who ALSO has convenient exploitable ties to China would have been worth thinking about.

But even they knew it wasn’t without risk. The fact that he is a drunken junkie and a whoring wastrel were the downsides they had to consider before doing business with him.

Apart from getting the wrong branch of the military he had been unceremoniously drummed out of, it sounds like they had a pretty good read on the guy we got to know all-too-well from the revelations in his laptop.

Tucker Carlson, in discussing this report on his show, gave some context:

… in terms of the Libya emails, the implication is “very serious.”

“Hillary Clinton had Muammar Qaddafi, the head of Libya, killed for reasons nobody ever explained… and then money from the [Tripoli] treasury was impounded.

“If Hunter Biden was actually lobbying the U.S. government while his dad was vice president to get that money, that’s a very big deal. It’s probably a crime,” he said.

Hillary, as you may remember, laughed when directly asked about Ghadaffi’s death. ‘We came. We saw. He died.’

There was a second email in the report from February 2016. Does this seem a little ‘incriminating’?

I spoke with HB’s team yesterday. They are interested in the project, but emphasized that for them to get involved, the team (lobbyists, lawyers and PR) would need to be a small group of folks they have a tight relationship with. They do not want a large group involved and they only want people with whom they have a close relationship with due to the sensitivities surrounding their involvement.

If we had a DOJ actually interested in enforcing the rule of law, this would be considered ‘evidence’ of a possible crime. A crime that points back to the ‘Big Guy’ who was getting his 10% cut from Hunter’s China deals, the same guy now sitting behind the irresolute desk.

If there were an (R) after his name, Joe would already be in prison. But there’s a (D), and in Washington DC, that fact alone is usually enough to grant a completely different set of rules by which your actions are judged.