Biden’s Losing His Faculties: Says His Son ‘Was Attorney General of the United States’ 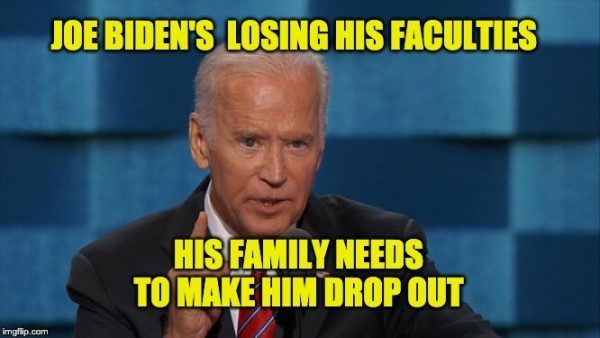 It’s time for Joe Biden to drop out of the 2020 presidential race, not because he can’t win a primary and his poll numbers are crashing but because it is becoming undeniable that he is losing his faculties. Even though I don’t support the guy politically it’s hard not to feel sorry for the guy. His latest memory lapse was about his late son, Beau Biden. Biden’s losing his faculties

At a CNN Town Hall, the former Vice President claimed, “My son, the one who, my deceased son, was the Attorney General of the United States, and before that, he was a federal prosecutor in one of the largest offices in the country in Philadelphia.”

Beau was never the AG of the U.S. He was the Attorney General of Delaware.  Maybe a small mistake, but he has made many of those small mistakes.

Here are some of his other “small mistakes.”

Here’s what he said about his son:

Your son was not the "Attorney General of the United States." pic.twitter.com/QnoT0xKvCW

I feel bad for @JoeBiden.. based on all the videos of him I’ve seen from 20 years ago, he would’ve made a pretty good President back then. Unfortunately, his views on those topics have changed, and he has become a senile old man, who relishes on “what could have been.” #PoorJoe

Biden, dude. Nice promotion for your late son but he was an AG of Delaware. These are vastly different jobs but maybe you forgot.

Hard to watch this man. Give it up. SMH…

Joseph ‘Beau’ Biden was Delaware’s Attorney General. It’s an elected position that he won on name recognition. He was away most of his tenure, either deployed with the National Guard or sick.

The time has come. https://t.co/8ogofddOU6

Hard to watch, god bless him tho, losing a child is the worst and he’s lost two.

Jenny has a point.

I genuinely feel concerned for Joe Biden. Old age is really coming down on him hard, he really should drop out of the race and enjoy retirement while he still has some of his mental faculties intact.

The real question about the former Vice President should not be he can win the primary in South Carolina; it should be whether or not he is suffering from dementia.  Some of Joe Biden’s recent statements, including the one above, seem to suggest the beginnings of a dementia-caused decline in memory and other thinking skills.

The fact that he has memory lapses should be an extra concern for members of the Democratic Party because as the pressure is building, his forgetfulness is getting worse. It’s no wonder his staff is trying to keep him away from the press. This isn’t a matter of politics, but as someone who has seen too many family members suffer from dementia,  watching them desperately fight to remember the names of their children and grandchildren,  I would strongly recommend one of Biden’s loved ones insist he gets examined.