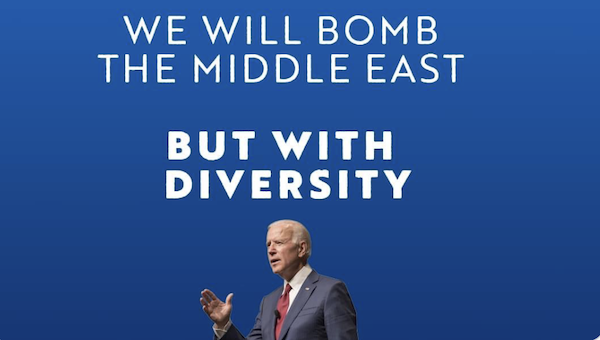 The Biden administration has defended the actions saying that the airstrike was against militants backed by Iran that had recently been attacking American service members.

“The Department of Defense briefed Congressional leadership before the action last night. The Administration has been briefing the Hill at the Member- and staff-level today,” Psaki said in an official statement. “There will be a full classified briefing early next week at the latest.”
Source: Fox News

Here’s the thing, though… Joe Biden was quite critical of then-President Trump’s targeted strike, killing Solemani just a little over a year ago. He even said that he didn’t believe it was done because there was an imminent attack targeting American troops.

Former Vice President Joe Biden said Tuesday that President Donald Trump’s assertion he ordered a drone strike on Iranian Maj. Gen. Qassem Soleimani to avert an “imminent attack” can’t be taken at face value because the commander in chief has “lied so much.”

In an interview with NBC News’ Lester Holt, Biden, a Democratic presidential candidate, said of Trump, “I don’t give him the benefit of the doubt of anything.”

He also pushed back on Trump’s statement that he ordered the strike that killed Soleimani “to stop a war.”

Biden said the strike that killed Soleimani “takes us a heck of a lot closer to war. We’re putting 18,000 more troops in the region. Do we have — have they planned ahead of time to make sure they secure all the bases we have and all the areas that Americans are in fact more vulnerable because of proxies of Iraq — of Iran?”
Source: NBC News

Biden in 2020 didn’t believe President Trump because he “lied so much.” Well, here we are in 2021, Biden is now President, and he has lied about the lack of a vaccine rollout under Trump, lied about being able to stop the spread of the coronavirus, getting kids back in schools, and has yet to deliver the campaign-trail promised $2000 stimulus checks. And then, there’s his history of plagiarism…. so, Biden exactly the paragon of honesty.

Now that Biden is bringing back the Swamp, which includes Obama-era policies of blowing things up in the Middle East while also being the sweet, tolerant, kind alternative to the Bad Orange Man.

That hasn’t been lost on many, many Americans.

Authorizing an attack a month after being sworn into office is just ripe for mockery.

It only took Joe Biden 37 days to bomb Syria. It took less to destroy America! pic.twitter.com/5AK5RIL3Mz

Dropping bombs like the Bush family was still in power… #Syria pic.twitter.com/2ZZXOtnA1q

Some praised the difference between the Biden bombing and Trump’s targeted drone strike.

No surprise.
Biden/Obama wanted to bomb Syria back in 2016. pic.twitter.com/1pfmNKlvGx

"I said uuuuh Joe… The only bombs I wanna see dropped in my old office uuuh, better be falling on Syria" pic.twitter.com/942lzXi8zY

Let me get this, Iraqis bomb the US in Iraq, but the US bombs targets in Eastern Syria? pic.twitter.com/uTVnf49UIW

Some Twitter users noted that the airstrike took priority over other promised agenda items.

Several memes specifically point out that the $2000 stimulus check that was a key campaign promise hasn’t managed to appear, but the bombing of Middle Eastern countries has resumed.

So you don’t have my 2K, but you have money to bomb Syria? pic.twitter.com/BqUjQq9Cgx

"They are mad about us using the stimulus money to bomb Syria, Joe." pic.twitter.com/9aJhTVBqxu

This non-meme post with a screenshot of a tweet by the current White House Press Secretary was particularly damning.

Exactly. This is where our $2000 checks went. Bombs for Syria https://t.co/ZOyVVcYKwR pic.twitter.com/zC0Yy3aA08

She will circle back to you on that.

Some tweeted about the hypocrisy of the left.

Liberals when Biden bombs a Syria and locks immigrants in cages pic.twitter.com/JUY9LTVT5M

Remember when the Left spent 4 yrs yelling that Trump was unstable and will start a war & needs those powers taken away, but instead he ushered in historic MidEast peace deals and now those same people just dropped bombs in Syria…that was awesome. pic.twitter.com/d43UCRjAl8

See? There is an upside to the Biden administration — it can be freaking hilarious! Until we suffer the consequences.