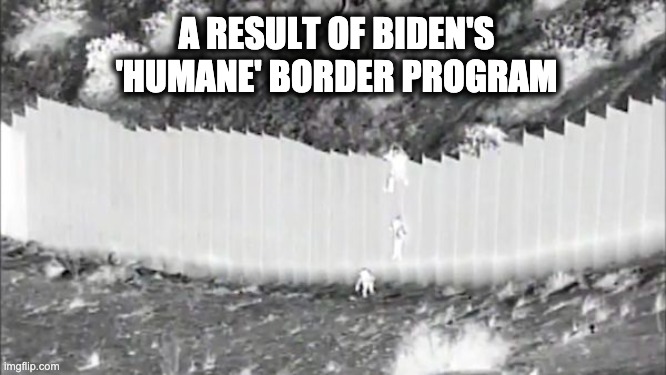 As a  result of the Biden-Harris Administration’s new “humane” border policy. Two Ecuadorian girls aged 3 and 5 were “viciously” dropped from the top of a 14-foot section of the border wall into New Mexico by “ruthless human smugglers” on Tuesday night, according to El Paso Sector Chief Patrol Agent Gloria Chavez of the U.S. Border Patrol. Biden’s ‘humane’ border policy

In the video below, you can see that after the 3-year old is dropped, she lands on her face and stays lying on the ground alone briefly as the smugglers prepare to drop her sister over the wall. Once both girls are over the wall, two men run along a well-worn path on the Mexico side of the border.

The area where the girls were dropped was described as “remote” by border patrol. Agent Chavez notes in her tweet that the girls “were left miles from the nearest residence.”

Smugglers, under cover of night, scaled a 14 ft. border barrier and cruelly dropped 2 young children in the middle of the New Mexico desert. The girls, ages 3 & 5, were left miles from the nearest residence. Thank you STN Agents for rescuing these children! @CBP @CBPWestTexas pic.twitter.com/U91y2g8Lk1

As reported by the Fort Worth Star-Telegram

The girls are 3- and 5-year-old sisters from Ecuador, according to U.S. Customs and Border Protection. They were described as “alert” when U.S. officials found them and were transported to a local hospital as a precaution.

They were medically cleared and placed in a temporary holding facility in Border Patrol control, officials say.

“I’m appalled by the way these smugglers viciously dropped innocent children from a 14-foot border barrier last night. If not for the vigilance of our Agents using mobile technology, these two tender-aged siblings would have been exposed to the harsh elements of desert environment for hours,” Chavez said. “We are currently working with our law enforcement partners in Mexico and attempting to identify these ruthless human smugglers so as to hold them accountable to the fullest extent of the law.”

Imagine how those children felt being abandoned like that in a remote area at night in the desert. The girls are seen at the end of the video facing the fence. It’s probably a good thing that the video did not have accompanying audio. They must have been terrified.

That is the ultimate example of child negligence. These smugglers dropped kids in a remote area over the border, not knowing what dangers were on the other side.

The traffickers ran off so that they wouldn’t be caught, but they didn’t seem to be concerned about those children’s fate because they know that Customs and Border Patrol agents are monitoring the border and will take care of those kids. The question is, did they use this as a distraction to smuggle drugs, criminals, or other desperate adults at another part of the border as CBP agents rescued these girls?

This isn’t something new. In 2018, coyotes did the same with several other children part of a larger family group crossing illegally at the Arizona border. Fox News reports that the wall section was part of the 27 miles of wall that was selected for replacement by the Trump administration in 2019.

President Trump stopped most of the illegal aliens from the border with an emphasis on ending human smuggling.  Biden has not only created an unprecedented surge of illegals crossing the border but has been very good for the Mexican organized crime cartels. These organized crime groups are getting huge] paydays thanks to President Biden tearing apart President Trump’s policies. The cartels do not value the lives of the people they are sending across the border…the people are commodities that can be easily replaced. There are horrible stories of rapes, torture, and deaths of people who are paying the cartels to help them sneak across the border. In a recent horrible example, they threw a six-month-old baby into the Rio Grande. Thankfully the baby was saved by the border patrol.

The Trump actions that Biden canceled during his first hours in office shut down illegal immigration and human trafficking to a trickle, but Biden and his team of leftists didn’t care.  Trump’s policies were humane. Biden’s policy of opening the borders and inviting illegal aliens to “come on in”  is anything but humane. Biden’s policies are a major cause of those two kids being tossed over the wall, the baby being tossed in the Rio Grande, as well as the rapes, torture, and deaths of unaccompanied minors and adults trying to sneak across the border with the help of organized crime cartels.