Or Was It As Obama Said," Don’t Underestimate Joe’s Ability To F-ck Things Up" 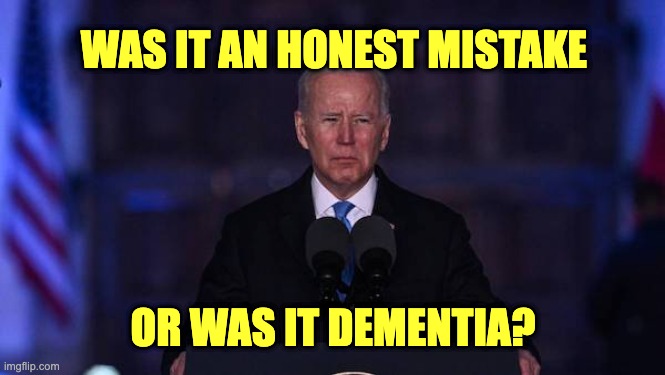 Bob Gates, former defense secretary:  Biden “has been wrong on nearly every major foreign policy & national security issue over the past four decades.”

As president Joe Biden has done his best to confirm statements of his former boss Barack Obama and the Defense Secretary for Bush #43 and Obama-Bob Gates.

Ukraine will never be a victory for Russia, for free people refuse to live in a world of hopelessness and darkness. We will have a different future, a brighter future, rooted in democracy and principles, hope and light, of decency and dignity, of freedom, and possibilities,” Biden said after NATO allies met last week for an emergency meeting on Russia’s invasion of Ukraine adding, “For God’s sake, this man cannot remain in power,”

Biden’s foreign policy beliefs have been wrong for much of his career. But his incompetence has worsened because of his mental deterioration. According to Rep. Ronny Jackson (R-TX) who was the White House physician for Obama’s second term and Trump’s first two years in the Oval Office has said that Biden should take a cognitive test, saying,  ‘The whole country is seeing his mental cognitive issues on display for over a year now, and there’s really no question in most people’s minds that there’s something going on with him’ [Biden] looks tired, he looks weak, he looks confused, he’s incoherent, and it sends a message of weakness all over the world, and they’re seizing up on that.’

Did Dementia Joe just call for a coup to toss crazy Vladamir out of office? Was this the same Joe who wouldn’t allow Ukraine to have old planes waiting for them in Poland? Didn’t he stop the plane sale from stopping Russia from starting a third world war?

Putin has told his country that the Americans were only trying to destroy the Russian government, and Biden’s statement gave some legitimacy to the despotic war criminal’s propaganda.

Biden’s underlings were quick to walk back the president’s blunder. For example, Secretary of State Antony Blinken took a break his trip to Israel trying to get their cooperation to sell out the US, Sunni Muslim states, and Israel to Iran to say the president didn’t really say what he said:

Secretary of State Antony Blinken told reporters Sunday that the U.S. has no plans for regime change in Russia a day after President Biden declared that Russian President Vladimir Putin can’t remain in power.

“I think the president, the White House, made the point last night that, quite simply, President Putin cannot be empowered to wage war or engage in aggression against Ukraine or anyone else,” Blinken said during a visit to Jerusalem.

“As you know, and as you have heard us say repeatedly, we do not have a strategy of regime change in Russia – or anywhere else, for that matter,” Blinken added

“In this case, as in any case, it’s up to the people of the country in question. It’s up to the Russian people.”

“I think most people who don’t deal in the lane of foreign relations don’t realize that those nine words that he uttered would cause the kind of eruption that they did. But anytime you say or even as he did, suggest, that the policy was regime change, it’s gonna cause a huge problem,” Risch said.

“This administration has done everything they can to stop escalating. There’s not a whole lot more you can do to escalate than to call for regime change,” he added.

The Idaho Republican himself attempted to walk back Biden’s comment before again imploring the president to “stay on script.”

I believe President Biden’s gaffes weren’t what he really thought. It’s an indication of his mental decline stemming from his growing dementia. The public can demand that Congress invoke the 25th Amendment to the U.S. Constitution. But his replacement V.P. Harris would be just as bad as Biden, and she doesn’t have dementia.

Congress must get involved in foreign policy. But Schumer is too cowardly to get involved, and Peloso would never go against a president from her party. But we cannot wait till January 2025. The mid-term elections are seven and a half months away. Voters must switch the majority to the GOP for each house of Congress so they can try to reign in this mentally handicapped president.