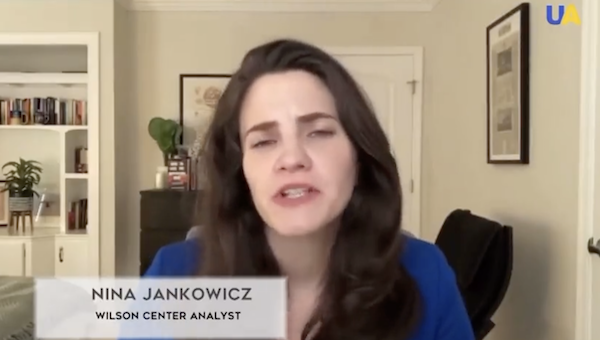 Remember Scary Poppins, Biden’s shiny new disinformation czar? It just so happens she’s got some shady connections with someone that even Joe Biden called out as a corrupt politician.

I mean, really… how far gone do you have to be that even Joe Biden recognizes your corruption?

It was already a red flag when we saw that Nina Jankowicz, who is supposed to be the arbiter between truth and fiction, denounced Hunter’s laptop as ‘misinformation’ while praising the discredited Steele Dossier.

Scary Poppins is now facing increased scrutiny for her role in Europe.

In the summer of 2017, Nina Jankowicz, a twenty-eight-year-old American, was working in Kyiv as a communications adviser to Ukraine’s foreign ministry as part of a yearlong Fulbright fellowship.

Fun fact: Nina Jankowicz worked in the administration of President Poroshenko, an oligarch with a reputation for extreme corruption who jailed my former boss for protesting him. Corruption was THE issue that drove 73% of Ukrainians to vote out Poroshenko & elect Zelensky in 2019. https://t.co/mnMHy1pWEy

It was already a red flag when we saw that Nina Jankowicz, who is supposed to be the arbiter between truth and fiction, denounced Hunter’s laptop as ‘misinformation’ while praising the discredited Steele Dossier. Our so-called arbiter of truth isn’t exactly batting 1000 here.

Even in the last few days, she has still been spitting out openly partisan talking points calling the Hunter laptop story ‘Russian Disinformation’ despite NYT and WaPo confirming its legitimacy. Ditto for claiming there is corruption in Ukraine.

Accusations of corruption by Hunter Biden and Burisma are Russian disinformation. pic.twitter.com/wstkfvpYG0

Why is that a problem? If anyone takes her seriously, it hurts her buddies on the left. Even the elected ones. Impeachment Democrats like Schiff, Pelosi, and even Biden must be ‘Russian propagandists.’

Impeachment Democrats used explicit claims of Ukraine corruption as their excuse for why it was A-OK for Joe Biden to withhold $1B of US foreign aid unless Ukraine’s President fires Prosecutor General Viktor Shokin, the prosecutor who had been investigating Burisma.

Ukrainians fed up with entrenched corruption and hungry for change are likely to elect Volodymyr Zelenskiy, a comedian with no previous political experience, as their next president in a run-off vote on Sunday.

They’re not the only source who thought so. Here are selections from a summary of events delivered by Pam Bondi at impeachment 1.0. Notice who she cites in this list:

December 8, 2015, NYT published an article stating that the new Ukrainian General Prosecutor, Viktor Shokin, was investigating Zlochevsky and Burisma. “The credibility of the vice president’s anti-corruption message may have been undermined by the association of his son, Hunter Biden,” with Burisma and its owner, Zlochevsky.

…February 24, 2016, a FOIA request reveals that a D.C. consultant reached out to the State Department to request a meeting to discuss Burisma and specifically mentioned Hunter Biden. The email said that she “noted that two high profile citizens are affiliated with the company, including Hunter Biden as a board member” and that the consultant would, “like to talk with Under Secretary Of State Novelli about getting a better understanding of how the U.S. Came to the determination that the country is corrupt.”

…Bondi then says that the Democrats didn’t give a clear picture of what happened despite mentioning Burisma and Hunter Biden 400 times in their opening statements.

BONDI: But here are those who did. The United Kingdom serious fraud unit, Deputy Assistant Secretary Of State, George Kent. Chris Heinz, the ABC White House reporter, ABC, Good Morning America, The Washington Post, The New York Times, Ukrainian law enforcement and the Obama State Department itself. They all thought there was cause to raise the issue about the Bidens and Burisma.

Scary Poppins describes herself as someone who has ‘made a career in democracy assistance.’

As a politics nerd, there was no question that I would spend Tuesday night on my couch, listening to the State of the Union (SOTU) address. As someone who has made a career in democracy assistance, the speech held even greater significance: it was an example of democracy in progress.

I have worked in support of democratic progress around the world since 2011 and joined NDI in fall 2013. The world has changed a lot in those 27 months. I watched historic first elections and shared in the joy of first-time voters. To see these hard-won successes gives me hope. But in countries where violence and instability are facts of life, these successes are hard to come by and even harder to hold onto.

Democracy assistance? That’s an interesting term. Is that anything more than a pretty euphemism for ‘regime change’?

Not according to Revolver news:

As it happens, Nina and Revolver have something of a history together. Two years ago, during the 2020 election campaign, Revolver ran a groundbreaking investigative series on so-called “color revolutions.” In essence, we exposed how many national security professionals who specialized in the “color revolution” regime change model overseas were employing the same tactics against Trump.

In the aftermath of our reporting, Nina joined a veritable army of “disinformation” journalists doing damage control, though Nina was a little too dim to properly understand what was going on. Here is the disinformation expert Nina reassuring her followers that national security professionals would never dare turn their tools inward against the American people—and, still more important, that color revolutions have nothing to do with race!

…So why is Nina so angry at somebody criticizing the color revolution model? Naturally, because Nina herself is the perfect representative of it: The fake “democracy” enthusiast who splits time between overthrowing governments abroad and suppressing free expression at home. Nina used to work for the National Democratic Institute, a group funded by National Endowment for Democracy, USAID, and the State Department, among other agencies. NDI played a major role in Ukraine’s 2004 Orange Revolution — pretty much the archetypical color revolution. During her own time at NDI, Jankowicz managed “democracy assistance programs” in Belarus and Russia, and then received a Fulbright grant to provide “strategic communications” advice to the Ukrainian government. Back in the U.S., meanwhile, Nina’s scholarly talents cover topics like “gendered disinformation” (she invented the term, y’know!).

A woman whose past experience has involved destabilizing foreign regimes and putting ‘friendly’ governments in their place seems a strange role for someone being called upon to protect America from Misinformation. What could *possibly* go wrong?

Is Biden just moving to the next phase of that ‘fundamental transformation’ his old boss promised? With all the other affronts to the Constitution we’ve seen so far in this administration, nothing would surprise us anymore.

DeSantis Warns Potential Hurricane Looters They Could be Shoot
The Floridian