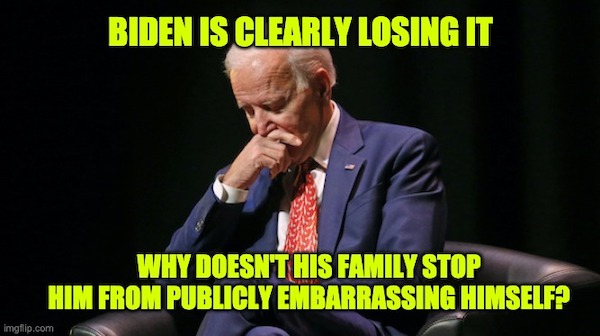 The former SCHMOTUS (Schmo of The United States), V.P. Joe Biden has always been a gaffe meister, but it’s been different lately. He seems to get angry more often, and more than gaffes, there are times he speaks gibberish and forgets facts that are ingrained in the memories of everyone who lived through it. Recently on CNN Biden’s Dementia was on display.

The left’s best chance to take down President Trump in November, Joe Biden, can’t even seem to remember that the terror attack took place in 2001.

Is he really that far gone?

During an interview on CNN with Anderson Cooper and Dr. Sanjay Gupta on Thursday, Biden stumbled when he tried to recall the year of the attack.

He also seemed to lose his thoughts during another part of that interview when he was obviously reading from a script:

This entire campaign season has seen examples of Biden losing touch.  At first, it just seemed like a memory loss, as he reversed positions he had held for forty years on the Hyde amendment and China. Then it started getting weird. He told a touching about going to Afghanistan to give someone a well-deserved medal-that never happened, or his climate change negotiations with dead Chinese Leader Deng Xiaoping, and spent lots of time with Kim Jung Un who he never met. Joe announced he was running for Senator instead of President, said his late son was the Attorney General of the United States. His corn pop story was also strange, as was one of my favorites: when he called a New Hampshire Voter, ‘A Lying, Dog-Faced Pony Soldier.’

These aren’t normal gaffs. I know how it works. I lost two family members to Alzheimer’s, and my Dad had dementia in his last year of life.

I will admit that even if Joe Biden was healthy, I could not bring myself to vote for him not only because I disagree with his politics but because he would be running against President Trump who IMHO has done a great job in his first term so far.

The fact that he has memory lapses should be an extra concern for members of the Democratic Party because as the pressure is building his forgetfulness is getting worse. Just wait till he has to face President Trump in debates.

This isn’t a matter of politics, but as someone who has seen too many family members suffer from dementia,  watching them desperately fight to remember the names of their children and grandchildren,  I would strongly recommend that one of Biden’s loved ones insist he gets examined.

Some of this post was first seen at Flag and Cross.