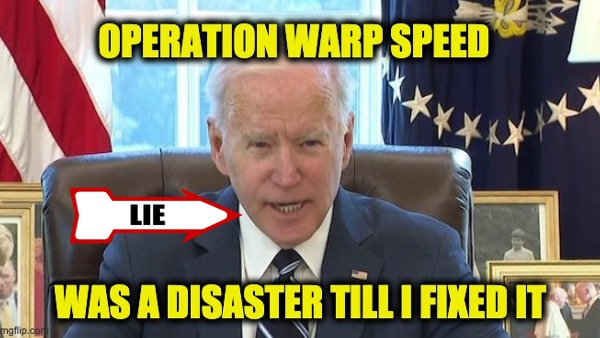 Last week, we saw Biden bragging that the real progress we have seen so far in getting Americans vaccinated for the Coronavirus has been almost entirely his own doing. To hear him tell the tale, he inherited a dumpster fire of a situation, and it was up to Team Biden to ride to the rescue on their white horse and fix everything Trump had broken. That was a lie. biden’s covid lies

When the vaccine came out only a few short days after the election, Biden and the other club his media allies were beating Trump up with — Governor Nursing Home fatalities himself — were already prepping the narrative and setting expectations for a FUBAR vaccination strategy.

There’s only one problem with that ‘Biden-To-The-Rescue’ narrative. It’s totally bogus!

Margaret Brennan: So you were just talking about supply, you know, President Biden has said that the Trump administration had not contracted for enough vaccine doses when he took office. And here’s what he said. As recently as a month ago, Biden blamed the Trump administration, saying “America has no real plan to vaccinate most of the country. My predecessor, as my mother would say, God love him, failed to order enough vaccine, failed to mobilize the effort to administer the shots, failed to set up vaccine centers. That changed the moment we took office.” Is that fair?

Dr. Slaoui: I think that’s a very negative description of the reality. I do think that we had plans, and in fact, 90% of what’s happening now is the plan that we had. Of course, the first thing was to accelerate the development of the vaccine. We contracted specifically 100 million doses of vaccine but also built into the contract options to acquire more vaccines once we knew they are effective. And the plan was to order more vaccines when- when we knew they are more effective. So I think what’s happening is right. But I think what’s happening is, frankly, what was the plan. Substantially what was the plan.

Former Operation Warp Speed Chief Adviser Moncef Slaoui: “90% of what’s happening now is the plan we had” under Trumphttps://t.co/Vt6lGpt9YM pic.twitter.com/owUWpjaoKK

Trump pre-ordered vaccines from multiple companies, not knowing which vaccines were viable.

Did anyone bother to ask whether there was a clause in those contracts for America to buy a heap more once the product line was proven viable? Or is that too much like ‘reporting’ and ‘journalism’ for these DNC mouthpieces?

Where did all those eager reporters who wanted to ‘stick it’ to authorities in the White House disappear to?

Okay, they transferred baby Jim Acosta, but where are the rest of the MSM WH reporters. Those burning desire to uncover malfeasance in the White House and challenge every syllable uttered on the record as somehow being a ‘lie’ whether true or not.

Remember how the MSM kept a running count of every Trump statement that they believed was a lie? I’m sure they aren’t keeping a count of Lyin Joe Biden’s frequent lies. Oh, that’s right. He’s a Democrat. They’re too busy shielding him from criticism to say anything bad about him.