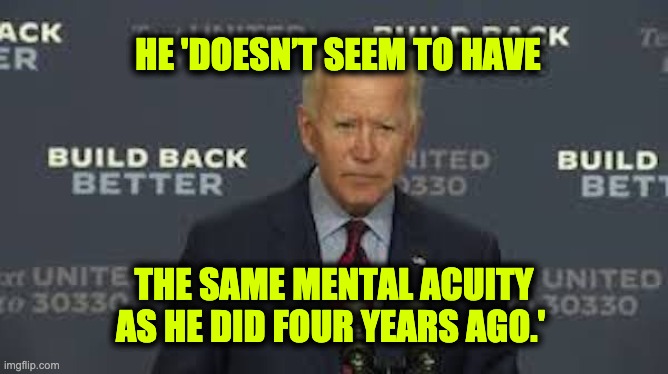 Mike McCormick transcribed Joe Biden’s speeches during his entire eight-year stint as vice president. He knows, perhaps better than anyone, that Joe isn’t the same mentally. McCormick says the presidential candidate’s cognitive functioning and speaking ability has deteriorated significantly in the last few years. “He’s lost a step, and he doesn’t seem to have the same mental acuity as he did four years ago.” biden’s cognitive ability has declined

According to the Washington Free Beacon, Mike McCormick, who served as a White House stenographer for 15 years and worked directly with V.P. Biden from 2011 to 2017, said the presidential candidate is “not the same Joe Biden.”

McCormick, whose book “Joe Biden Unauthorized” chronicles his time in the White House, told the Beacon that Biden had a talent for reading and relating to audiences. And he would often go off-script, something dementia Joe doesn’t do anymore.

“He’d just make a big joke out of it, and go straight from the hip. And notice, he’s not doing that anymore. He read that [Democratic National Committee speech] verbatim … it’s not Joe Biden anymore,” McCormick said, noting he looks “lost” during interviews now.

The Beacon notes how Biden has been sticking to his teleprompter so closely that he reads the cues mentioned in his scripts out loud. And they published a video displaying one week of gaffes, which includes a segment where he does his best Ron Burgundy imitation “end of quote.”

Dementia Joe has also made other odd statements like, telling one online audience that when he was a patient at Walter Reed Hospital, the nurses would “breathe in my nostrils to make me move.

During the primary season, in February 2020, Joe said, “One of the things I’m proudest of is getting passed, getting moved, getting in control of the Paris Climate Accord. I’m the guy who came back after meeting with Deng Xiaoping and making the case that I believe China will join if we put pressure on them. We got almost 200 nations to join.” Biden should be proud of the accomplishment if he had really negotiated with Deng Xiaoping . After all, by the time the Paris Accords were negotiated.  Deng Xiaoping was dead almost a quarter-century.  Folks, that’s not a gaffe, that’s another example of Biden’s memory loss.

Understand that I could never bring myself to vote for Biden even if he were of sound mind.  His politics are far left-wing, and he is running against President Trump, who IMHO has done a great job in his first term so far. But the fact that he is not of sound mind should be a concern to all Americans.

Folks, even before his former stenographer was interview by the Free Beacon, it was apparent that his memory was clearly getting worse.

These aren’t normal gaffs. I lost two family members to Alzheimer’s, and my Dad had dementia in his last year of life, at least for me, it is easy to recognize. One of the questions people ask of voters during presidential campaigns is, do you want this person to have their finger on the nuclear button? I fear that with Biden, someone would first have to explain to him what a button is.

Mike McCormick was on the Laura Ingraham show Tuesday night. Below is a video of that interview.