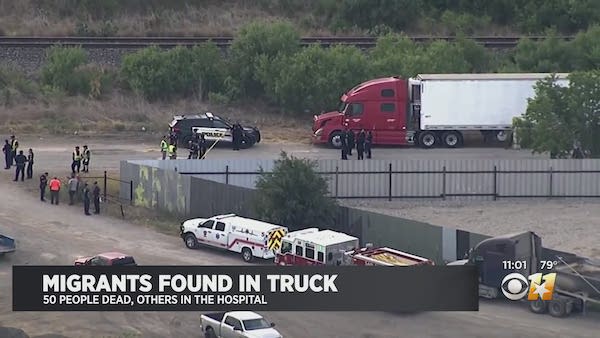 As much as the Democrats loved to harp on what they alleged was cruelty,  Today, we see at the border that they are creating a horror show. Outside the tractor-trailer, it was 103 degrees. Just think how hot it was inside. Thanks to the Biden administration, these people died from the heat. There was no air conditioning or water where the victims were.

Nobody wants to talk about it, but the fact is that illegal border crossings are unfavorable not only for their eventual impact on the USA, but they are also incredibly dangerous and exploitative for those who would otherwise be on a path to American citizenship.

This week provided another example of why America should be doing more to entice migrants to enter the country legally.

The federal officials confirmed to CBS News Homeland Security and Justice reporter Nicole Sganga that this appears to be the deadliest human smuggling case in modern U.S. history. Who says that Biden never got anything done?

On Tuesday morning, Mexican Foreign Relations Secretary Marcelo Ebrard said on Twitter, citing U.S. authorities, that the victims included 22 Mexicans, 7 Guatemalans and two Hondurans. Investigators are still determining the nationalities of those who died or were hospitalized, Sganga reports.

Illegal border crossings have predictably increased under the Biden administration, as “border czar” Kamala Harris continues to provide a lackadaisical response to the crisis.