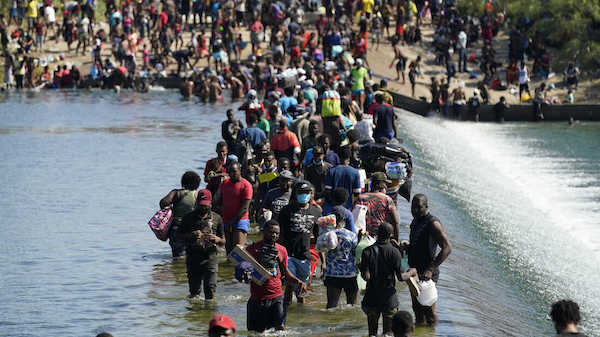 For years now, it has been pretty obvious that Democrats don’t care to understand how their lax border policies are damaging the nation.

Even the election of a Democratic President can profoundly impact our immigration system, as liberal lawmakers’ border agenda essentially gives the green light to those who would enter our country illegally.

This has never been truer than when Joe Biden ascended to the presidency, and the data proves it.

The number of migrant encounters at the southern border has smashed through the two million mark this fiscal year, breaching the already-historic 1.7 million encounters last year — but those numbers by themselves do not state how have been released into the U.S., or account for hundreds of thousands of others who have slipped past Border Patrol.

There have been more than two million migrant encounters at the U.S.-Mexico border in FY2022, as Border Patrol agents deal with a migrant crisis unprecedented in U.S. history and one that the Biden administration has so far failed to slow, despite its claims that the border is “secure.”

According to CBP statistics, so far this fiscal year more than 500,000 migrants have been released into the U.S. by Border Patrol on their own recognizance with a court date (called a Notice to Appear) or paroled into the U.S. and enrolled into Alternatives to Detention (ATD). That statistic does not include the final two months of FY22. The New York Times this week cited internal DHS documents and court filings to report that more than a million illegal migrants have so far been released into the U.S.  for asylum hearings overall since Biden took office. That number will continue to rise in the months and years ahead.

About a third of those are being monitored under “Alternatives to Detention,” which typically includes checking in via a cellphone app, but can also involve ankle bracelets or in-person visits. The ATD program has been touted strongly by the Biden administration, but Fox News Digital previously reported on a Trump-era draft report which described the program has “little value.”

Biden appointed Vice President Kamala Harris to oversee the crisis. Still, the veep has been unwilling to attempt to find a solution after refusing to even visit the border for over 90 days after being given the role.