Biden’s Best Lies During His 22 Months As POTUS 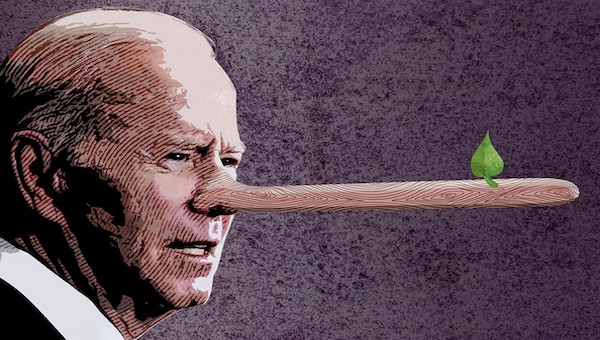 Face it, the President of the U.S. deserved his nickname of  Lyin Joe Biden. He generally tells at least one every time he opens his mouth. IMHO the ones below represent his presidential best.

For instance, he claimed he was never warned about how bad his pullout of Afghanistan would be, and no one told him it was a bad idea. But several of his top generals disputed that claim. Biden then blamed Trump for the lousy withdrawal but ignored the plan Trump negotiated with the Taliban.

When Georgia overhauled its election process, the POTUS slandered the bill as the “new confederacy” and “Jim Crow 2.0. Assuming his advisors read knew the bill, Joe was lying when he slandered the bill as racist. He made his claims hypocritical during his senate career; he was so racist that one of his nicknames was Jim Crow Joe.

Biden has repeatedly claimed he was “raised in a black church.” He had constantly claimed that when he was a teen in Wilmington, Delaware, he met with black congregations to “desegregate movie theaters and restaurants.” He is a liar. There is no evidence that Joe Biden had anything to do with black churches. Heck, he was a racist.

The President keeps claiming that his son, Beau died in battle in Iraq. He did not. On October 3, 2008, Beau was shipped to Iraq. Biden returned from Iraq in September 2009 after completing his yearlong active duty. When stationed in Iraq, Beau spent seven months in the combat zone. Once he returned to Deleware, Beau Biden served two terms as the State’s Attorney General. Beau was diagnosed with cancer in the summer of 2013. Sadly in May 2015, Beau Biden died from brain cancer. At the time, he was treated at Walter Reed Hospital in Bethesda, MD.

During a campaign speech in Warren, Michigan, Joe Biden, then the Democrat nominee for the White House,  falsely claimed that over 6,000 members of the U.S. military have died from the coronavirus. The actual number was seven.

And, of course, we have his most famous and oft-repeated falsehood-Amtrak He told a lie during the campaign and after he moved into the White  House:

BIDEN: “I commuted every single day, 263 miles a day, on Amtrak from the time I got elected United States senator. As a matter of fact, when I was vice president, I used to like to take the train home when my mom was very sick and dying, and I’d come home every weekend to make sure I’d take the train home. …

Nice story, except per Fox News and N.Y. Post

There were many more lies Biden has made as President, covering inflation, illegal immigration, crime, COVID, and so much more. Most of his lies aren’t reported by the MSM as lies. Therefore assume that everything he says is a lie until you check out the facts yourself.