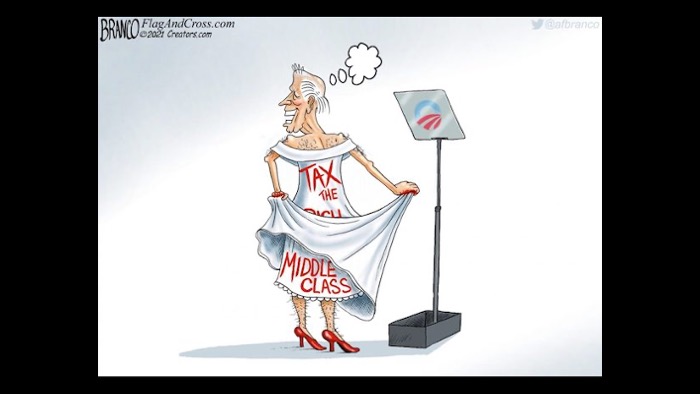 by Richard Manning and Jeff Dunetz

President Joe Biden’s Wreckonciliation bill that awaits consideration in the Senate more than doubles the number of IRS agents purportedly to go after the 614 billionaires in America.  The problem is that really, really wealthy people pay brilliant people to figure out how they can legally pay as little in taxes as possible.  In other words, they follow the law.

So what might those 80,000 plus brand new, inexperienced agents be doing?  If you work in the gig economy, buckle up because your tips, cash payments, and independent business status put you squarely in their crosshairs. Biden’s union allies have been at war with these mini-entrepreneurs who crave the flexibility of fitting work into their own schedules in a desperate bid to fit them into a 1950s workplace box that they can compel to pay dues.

California’s disastrous and notorious Assembly Bill 5, which passed in 2019 and a federal court allowed to go into effect in April of 2021, has been a primary cause of the massive container ship back up off the Ports of Los Angeles and Long Beach. The law ended the ability of independent truckers to pick up cargo in the once Golden State, creating the trucking shortage, which has led to more than a hundred ships waiting to be unloaded, empty shelves, and contributes to inflation.

The left hates those who don’t conform to their control systems and gig workers like independent truckers, Uber drivers, and those who rent their homes using apps like Airbnb.  House Democrats voted to sick 80,000 IRS agents on you.  Now it is the Senate’s turn.  If these mini-entrepreneurs wake up to the reality that the Biden so-called build back better plan will unleash the IRS paperwork police to investigate their meager earnings, the bill won’t have a chance.

Middle-class America is suffering from inflation, Biden’s policies have increased energy prices. They will worsen as we get closer to the winter and the home heating oil season, and the Democrats just passed their build back better plan that will increase taxes on the middle class and decrease them for the ultra-rich Consider that with 80,000 new IRS agents trying to squeeze every last penny out of your wallet. This plan demonstrates the actual difference between the parties.  The GOP is the party of the middle class. The Democrats are the tax and spend party.