More Biden Unity? White House Says Bills Are ‘Bipartisan’ Even If They Have No GOP Votes 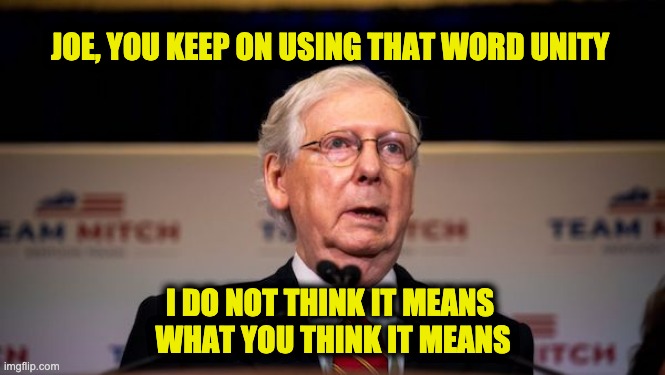 The candidate that campaigned on “unity” and a “return to norms” has decided that his administration will simply redefine the term “unity” to mean measures passed by one party only. Biden unity

The Hill reports that the White House wants to “change how people perceive bipartisanship” and argues that if proposals are backed by the GOP and independents, they should be considered “bipartisan” even if Republicans in Congress don’t vote for them.

Ah, can’t you just feel all that “Biden Unity”?

The White House is moving the goalposts on what “bipartisan” actually means — the new claim is that a bill is “bipartisan” simply because the opposing party had made a similar proposal. Take for example the bloated, pork-filled Democrat Spending Bill that was marketed as a COVID Relief Bill, it could be considered “bipartisan” even though it received zero GOP votes and was concocted by a small cabal of Democrats and rejected all but 2 of the 286 Republican amendments to the bill.

The push to call Democrat-only bills “bipartisan” comes as the Donkey Party proposes mass spending bills that are essentially Democrat Wish Lists while marketing them as something that the general public wants. The inappropriately-named “American Rescue Plan” and the looming infrastructure spending bills are prime examples of this.

Even White House Press Secretary Jen Psaki accidentally admitted that the infrastructure bill isn’t what it seems to be.

The effort took shape as Democrats approved a massive and broadly popular $1.9 trillion coronavirus relief measure with zero GOP support, and continues as the party increasingly looks poised to move another $2.25 trillion infrastructure measure through Congress just with Democratic votes.

President Biden campaigned as a unity candidate who would work with Republicans, and the GOP increasingly has criticized him for turning his back on that vow with the big Democratic-only measures…

…Biden officials argue that the measures they are proposing have broad public support from members of both parties in polling and that some of the ideas have been backed by GOP lawmakers in the past.

But the Biden-Harris admin’s push goes even further — they’re saying that it doesn’t even matter if lawmakers support the bill, as long as there is popular support among Republicans in the country. It’s a bizarre shift.

Take for example the nearly $3 Trillion infrastructure bill that is being floated. There is widespread support for infrastructure improvements, but Democrats want to shove things like drug pricing and climate activism into the bill. The plan is to try to pass the bill with GOP support, but if that doesn’t happen, claim that it’s “bipartisan” anyway because over 40% of Republicans are cool with infrastructure spending.

White House chief of staff Ron Klain said this week that Biden hopes the package will attract bipartisan support in Congress but made clear that was not a necessity, opening the door to passing a package using budget reconciliation — the same mechanism used pass the coronavirus bill and dodge a filibuster.

The White House is also banking on support for the package among Republican mayors and governors, given the benefits of investments in improving infrastructure in local areas and keeping cities and states vibrant.

“[Biden is] changing the locus or the locale of bipartisanship,” said Barbara Perry, director of presidential studies at the University of Virginia’s Miller Center, noting that bipartisan work is historically seen as situated in the halls of Congress. “Now, we are shifting that out into the countryside.”

This is all about changing language. If “bipartisan” now means that something can pass with one party’s support, then why bother working to get the support of the other party?

Republicans reject the notion that a bill can be bipartisan if it isn’t passed with bipartisan support in Washington.

“The reality is, if you’re going through budget reconciliation on something, you’re doing that because you’re not going to get bipartisan support,” said Doug Heye, a Republican strategist and ex-deputy chief of staff to former GOP House Majority Leader Eric Cantor (Va.).

Remember that moment at Biden’s first presser when he said that he “didn’t know if there would be a Republican Party” in 2024?

It all makes sense.

We’ve got large corporations pushing back publicly on Republican-backed voting integrity measures while the Democrats cheer it on. The President of the United States has publicly backed the MLB move to pull the All-Star Game out of Georgia based on his “Big Lie” that the voter I.D. law isn’t “Jim Crow, it’s Jim Eagle.”

The drunk-on-power Biden-Harris administration is pushing to eliminate the filibuster and redefine “bipartisanship.” If they succeed, why would the country even need to have a Republican Party in 2024?

Is this the “Biden Unity” that we were promised?