Biden Tried To Talk Crime This Week — And Failed 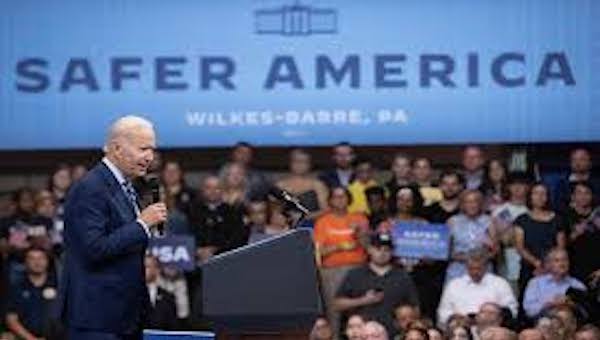 Most Americans — and not just Republicans — are understandably anxious over rising crime occurring in major Democrat-run cities.

Polls have not only consistently shown crime as a top issue for voters, but close to half of the residents in places like Philadelphia reported feeling unsafe in their neighborhood, while two-thirds say they’ve heard gunshots near their homes this year. Nearly 400 people have been slain in Philadelphia in 2022 — a significant increase from the pre-pandemic and Black Lives Matter era  — with higher numbers in places like Chicago and elsewhere.

Biden continues trying to quell the (mostly accurate) perception that Democrats wish to defund the police.

“When it comes to public safety in this nation, the answer is not defunding the police. It’s fund the police,” Biden claimed. That may be his favorite line, but his party wanted the opposite two years ago.

Crime is up for many reasons; one is police quitting in droves nationwide, meaning fewer cops are dealing with more crime. Biden failed to mention that law-enforcement agencies have more than 1,000 police vacancies in the commonwealth.

Another problem is that Biden, like most Democrats, won’t offer any serious ideas. As a partisan hack, he instead attacked the so-called “gun lobby” and, of course, Trump Republicans for not condemning the Jan. 6 riot.

“Let me say this to my MAGA Republican friends in Congress. Don’t tell me you support law enforcement if you won’t condemn what happened on the 6th. . . . Whose side are you on? Look, you’re either on the side of a mob or on the side of the police.”

That’s lazy and irresponsible. And when it comes to guns, some Republicans even worked with Democrats this summer to pass a bill in the wake of the May Texas school massacre.

Urban residents living in chaos are worried about illegal guns in the hands of criminal gangs, not ordinary folks quietly exercising their second amendment right to protect themselves or hunt.

Instead of addressing the nationwide crime wave, President Biden has set his sights on eroding the Second Amendment and demonizing law-abiding gun owners. @HouseGOP won't back down, we will continue to fight to protect your constitutional rights.https://t.co/QwFKs0BCMi

Maybe Biden should instead besmirch despicable prosecutors like Philadelphia District Attorney Larry Krasner, who boasts about how few criminals he’s put behind bars. The disorder will continue until liberal politicians prosecute and incarcerate lawbreakers.

Like many Republicans, I live in a safe small town, and unless forced by work or other obligations, I avoid large urban cesspools ruined by Democrats. But I still care because I want Americans to be secure and see evil deterred.