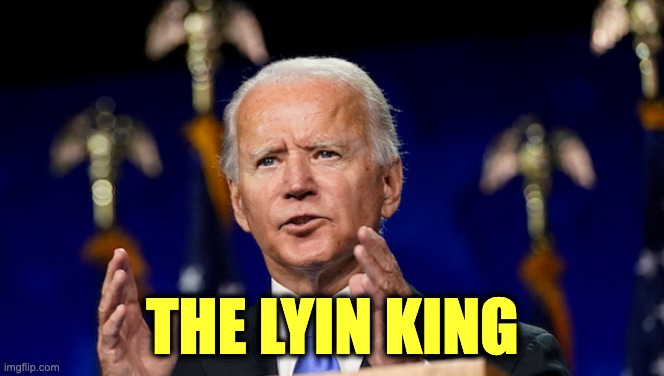 The closer we get to Election Day, the more outlandish Biden’s wild-eyed lies get, and the harder the media works to pretend he didn’t utter them.

You’ll recall that last week, Biden lied and said gasoline was over $5 per gallon when he took office. That was a straight-out lie on that one. In fact, it was under $2.50 at the time.

The average price of gas when Joe Biden took office was actually $2.39. pic.twitter.com/32SSNWdkpC

But this week — even though the week is only 3 days old — he has lied time and again about what he has done, about his family, and about the global inflation rate. His bald-faced lies are piling up by the bushel baskets full, and the media is wholly ignoring the whole thing.

For instance, he once again trotted out his serial lie that he “got his start” at Delaware State University, a black college. He lied. He went to the University of Delaware, which was mostly white when he attended.

While campaigning for @CharlieCrist in Miami-Dade County, @JoeBiden claims that he went to college at a HBCU (Historically Black institution) Delaware State University.

He didn't… He went to the University of Delaware. pic.twitter.com/m8HYBIvCsr

He also trotted out his lie about the death of his son, Beau. For some reason, this decrepit old fool keeps hoping people will believe that his son, who was in the Delaware National Guard and served in Iraq, died at war.

BIDEN: The reason I accidentally said "the war in Iraq" is to blame for inflation is because "that's where my son died." pic.twitter.com/1UanbSgX4B

In fact, Beau died of cancer several years after he got home. Beau Biden was NOT a hero who died in the war. He served honorably, of course. But he did not die in the service.

Biden has delivered this lie before. And he keeps doing it despite it being 100% false.

And here is a brand new lie that he has never disgorged before. For some reason, he thinks he “met” the guy who discovered the life-saving drug insulin.

Joe Biden claims that he spoke to the man who invented insulin. pic.twitter.com/FLjIZ1jPdE

The truth is insulin’s co-discoverer, scientist Frederick Banting died on Feb. 21, 1941. And Joe Biden? Well, he wasn’t even born until Nov. of 1942! And the other scientist credited with discovering insulin is John Macleod, who died in 1935, seven years before Biden’s birth.

It was all just another of Biden’s straight-out, self-aggrandizing lies.

Finally, Biden lied when he said the U.S. has the “lowest inflation rate of almost any major country.”

If a Republican had delivered this many lies in only a week’s time (and many at the very same event), that politician would have become the laughingstock of the entire media establishment. He would be thoroughly destroyed as a crazed, slobbering liar who should never be trusted. The media would be pounding these lies in every broadcast, article, and news program.

But for Biden? It’s crickets.