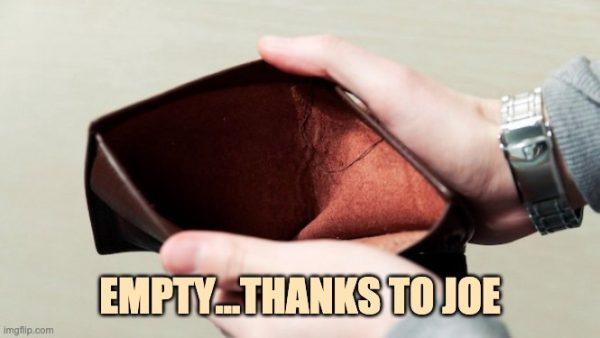 When April Long, a 45-year old suburban mother in Detroit, pays the family bills, she sets aside an extra $100 each month to call her “Trump cash.” That’s how much her family saves each month from the 2017 Trump tax cut.

“Trump has been a blessing to our family,” Long said. “Under Obama, our family struggled for many years. My husband lost his job. We couldn’t afford to buy a home. Those were tough times, and I don’t want to go back to those days.”

“My husband and I work hard to support ourselves and our son,” explained Long. “That extra Trump cash goes to savings. I don’t want Joe Biden taking that from us to pay for more of his big government programs.”

In elected, Biden plans to roll back that tax cut and raise taxes to finance his socialist healthcare agenda. He’ll need to raise $2.25 trillion over the next decade to pay for it, according to an analysis from the Committee for a Responsible Federal Budget. That’s not counting the cost of lowering Medicare’s eligibility age to 60.

But Biden has repeatedly promised voters who earn under $400,000 that his tax hikes will not affect them. Narrowly speaking, that is true. However, according to the Penn Wharton Budget Model’s independent analysis, those households would see lower investment returns and wages as a result of Biden’s corporate tax increases.

Economists at The Tax Foundation agree. Board member and former head of the Congressional Budget Office Doug Holtz-Eakin recently pointed out, “it simply is not economically possible to segregate the impacts on the high-income from everyone else.”

That’s because the rich purchase items from others, some not as rich, and from businesses that employ workers across the income spectrum. The corporate tax falls partly on workers in the form of lower pay. Similarly, the individual income tax paid by pass-through businesses falls partly on employees of those businesses.

Senior policy analyst Garrett Watson of the Tax Foundation has written at length about the Biden-Harris campaign plan to eliminate deductible traditional contributions for 401(k)s, individual retirement accounts (IRAs), and other types of retirement vehicles. The plan would instead provide a 26 percent refundable tax credit for each dollar contributed. As a result, this plan would reduce traditional retirement accounts’ tax benefits for those earning above $80,250.

The Biden-Harris campaign proposes multiple reforms to firearm regulation, including an expansion of the number of firearms subject to the National Firearms Act (NFA), which imposes a $200 tax on the registration of each NFA weapon. As a result, certain gun owners would see their tax liability rise, regardless of their income.

Analysts at the National Taxpayer’s Union warn that America’s middle class should be worried about a Biden presidency.  A recent study concluded, “any kind of tax plan intended to pay for a massive spending program like ‘Medicare for All’ or student loan forgiveness would have a hard time raising sufficient revenue without dramatically increasing taxes on middle-income households.”

Americans for Limited Government president Rick Manning put a finer point on it, saying, “Joe Biden’s tax plan is going to ruin this country. The idea that he is going to only raise taxes on people who make over $400,000 is a complete fraud. The money is in the middle class.”

Biden often talks about eliminating Trump’s corporate tax cuts. Manning explained that those cuts resulted in a net drop to federal coffers of between $50-75 billion. “That’s not anywhere near enough money for Joe Biden to pay for all his government giveaways. The real money, as everyone knows, is always in the middle class. That is why big-spending politicians like Biden always end up taxing the middle class, either directly or indirectly.”

Biden is simply not telling the truth when he says his tax hikes would not affect households earning less than $400,000 a year.