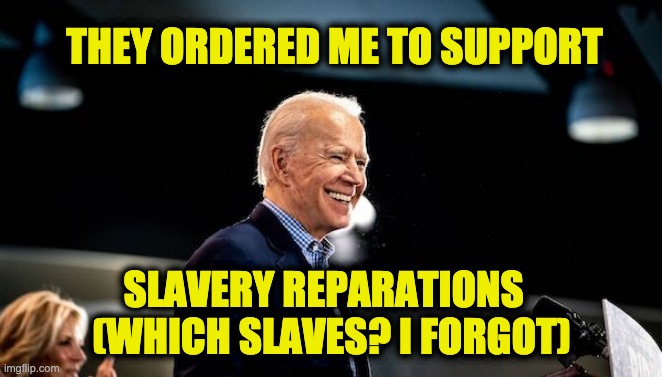 Cedric Richmond, a senior adviser to President Biden, says the administration is “going to start acting now” on reparations for African-Americans (I suppose it’s because his leftist handlers have ordered him to start).  Biden slavery reparations

In an interview with Axios on HBO, Richmond reminded viewers that Biden continues to support House Resolution 40, a piece of legislation resubmitted last year by Rep. Sheila Jackson Lee (D-TX) which would create a “reparations commission.”

But the President “also said we don’t have time to study,” Richmond noted.

He added, “We have to start breaking down systemic racism and barriers that have held people of color back, and especially African-Americans who were enslaved.”

Biden Will Act on Reparations Immediately
Richmond was asked about actual direct payments given out to the African-American community by the Biden administration, but he instead cited other examples of what he considers reparations.

Biden, who has a history of racially-charged comments, made it clear during his campaign that he supports at least a study of reparations for the black community. You may remember he wasn’t getting support from African American voters until the serial abuser of the Holocaust memory for political purposes,  Rep. Jim Clyburn announced his support in the South Carolina primary.

Over the summer, he and Senator Bernie Sanders created a unity platform that included support for House Resolution 40.

H.R. 40 currently has 173 co-sponsors, all of whom are Democrats. It seeks to “establish a commission to study and consider a national apology and proposal for reparations for the institution of slavery.” An apology and payment for something that no American alive today has experienced.

White House press secretary Jen Psaki reiterated at a briefing in early February that President Biden supports the study, which is contrary to what Richmond said.

REPARATIONS: This week, Jen Psaki told reporters that President Biden "certainly would support a study of reparations, and he understands that we don’t need a study to take action, right now, on systemic racism." https://t.co/GOG7khFI3s pic.twitter.com/MNawLxdKq1

Former President Barack Obama, in a podcast interview with Bruce Springsteen last week, suggested reparations are “justified” and claimed one of the reasons he couldn’t get it through during his administration was due to “white resentment.”

“If you ask me theoretically ‘Are reparations justified?’ the answer is yes,” said Obama. Obama went on to defend not pushing for reparations when he and Biden were in the White House alleging it would have been met with “the politics of white resistance” and “white resentment.”

That sounds like an excuse. It’s more likely that he was too busy sucking up to Iran and screwing Israel to work on reparations.

If Obama would’ve started the development of a reparations program during his tenure, he doesn’t have to use whiteness as a scapegoat here. I have zero respect for this man. The reality is, Obama was never for us. He crushed centuries of civil rights work in 8 years. #Reparations pic.twitter.com/HwuSvDyJHJ

Psaki hedged on whether or not Biden would create his own commission to study reparations when asked during a press briefing. “He has executive order authority. He would certainly support a study, and we’ll see where Congress moves on that issue,” she said.

‘Circle Back’ Psaki said the same when asked if the President would actually sign H.R. 40.

“Well, it’s working its way through Congress,” she replied. “He’d certainly support a study, but we’ll see what happens through the legislative process.”

That includes comments going all the way back to when he argued desegregation would mean his children would be forced into a “racial jungle,” and up to his most recent campaign when he told African-American voters “you ain’t black” if you don’t vote for him.

Recent polls have shown that a vast majority of Americans are opposed to reparations (not that Biden cares about anyone’s opinion except those of his extreme leftist handlers).