Taking Advantage Of A Weak President 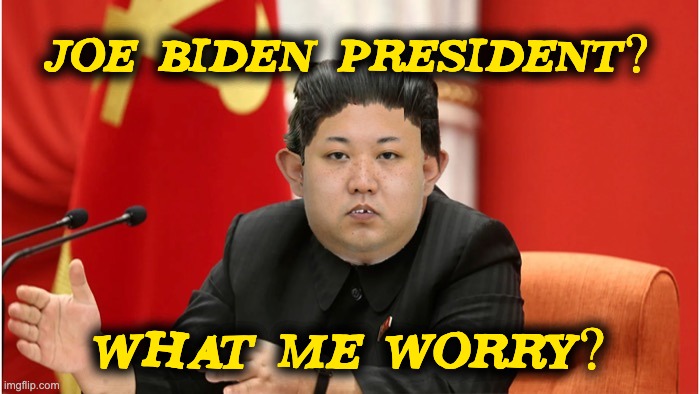 Biden ran as a supposedly steady hand on the tiller of the ship of state, a ‘return to normalcy, and told the world that ‘America’s Back’ when he was proclaimed the winner. Historians will one day recount that ‘America’s back is exactly where Biden’s administrative misfeasance or malfeasance has plunged the knife.  Biden showing weakness

Trump, we were told, was alienating our friends, especially NATO, while emboldening our enemies with such dangerous acts as opening dialogue with North Korea’s ‘hermit kingdom’ to see if there was any point of common interest on which a non-violent path forward could be forged.

Neither side was willing to make the kind of concessions the other side agreed on, but at least their nuclear reactor had been powered down and had stopped producing enriched materials.

Considering the precipice our relationship with North Korea was teetering on when Obama handed the baton of leadership over to Trump, and the infamous ‘Rocketman’ and ‘Red Button’ tweets that had been exchanged between our leaders, after provocative ballistic missile testing, any time of detente was a win, and potentially a step forward to more normalized relations. As you may recall…

The Obama administration considers North Korea to be the top national security priority for the incoming administration, a view it has conveyed to President-elect Donald Trump’s transition team, according to people familiar with the conversations.

…President Barack Obama, in a policy of “strategic patience,” refused to engage his administration in high-level negotiations with North Korea, waiting for leader Kim Jong Un to show he was committed to abandoning his nuclear arsenal.

Current and former administration officials now worry that the pace of North Korea’s nuclear weapons development, particularly its steady march toward the ability to mount a weapon on a ballistic missile, demands a more aggressive strategy.

Trump did go on to employ a ‘more aggressive strategy’ to curb North Korea. He leveraged the power of massive and crippling sanctions against North Korea.

What a difference just a few months makes. With Biden having alienated America’s allies by failing to live up to promises and living by the Taliban’s timeline for leaving, rather than that of our G7 NATO allies, confidence in his leadership, his reliability, and his will has been considerably shaken.

China has begun taunting Taiwan that they have no friends left who can protect them from being swallowed up by the Communist Chinese, and they are taking aggressive new claims on the South China sea as of September first. On top of that, Biden has ‘donated’ tens of billions of dollars of military hardware, including helicopters, armored vehicles, drones, machine guns, and night vision to fighters who mean harm to us and those who have helped us.

Seizing his opportunity in the chaos, Kim Jong-un has rebooted his arms race.

North Korea appears to have restarted its biggest nuclear reactor after more than two years. The United Nations nuclear watchdog agency said in a report published late last week, calling it a “deeply troubling” development. The International Atomic Energy Agency called the isolated country’s nuclear program “a cause for serious concern” and pointed specifically to “new indications of the operation” of the 5-megawatt Yongbyon reactor as “deeply troubling.”

The agency said that any continuation of the North’s nuclear program was “a clear violation of relevant U.N. Security Council resolutions and is deeply regrettable.”

…” There were no indications of reactor operation from early December 2018 to the beginning of July 2021. However, since early July 2021, there have been indications, including the discharge of cooling water, consistent with the operation of the reactor,” the IAEA report said.

‘Rocketman’ tested Biden at the very beginning of this administration. Kim’s provocation was not answered with strength but with weakness.

Mr. Biden confirmed that the projectiles were ballistic missiles and thus a violation of the myriad U.N. sanctions that bar North Korea from testing such weapons, and from nuclear enrichment work.

The president said at the time that he considered North Korea his top foreign policy challenge, and one on which he was consulting continuously with America’s allies and partners as the White House sought to craft a new policy on the threat.

How do bullies like North Korea’s dictator (Or Putin, or Xi, among so many others) respond to perceived weakness? They are emboldened by it.

For all the vitriol heaped on Trump, he made good on his pledge to bomb the hell out of ISIS. He took Solemani and al-Baghdadi off the board. When Syria was said to have employed nerve gas on its own people, Trump took strong and decisive action against an airbase. He was strong in his responses but not reckless. The same President who opted for non-lethal force against Iran blew up an Al Qaeda outpost with a MOAB.

He didn’t just TALK tough. He backed it up with action. This fear of consequence kept the Taliban from launching any lethal attacks against American forces over the final year of his term.

Biden’s exit-at-any-cost approach signaled a very different kind of Presidency. Our friends and our enemies have noticed and are responding accordingly.

Biden wouldn’t be the first world leader hoping to proclaim ‘Peace In Our Time.’ And we well remember how such naive optimism worked out for old Neville Chamberlian.

When the chips are down, the leader’s character — whether it is weakness or strength — has real consequences worldwide.