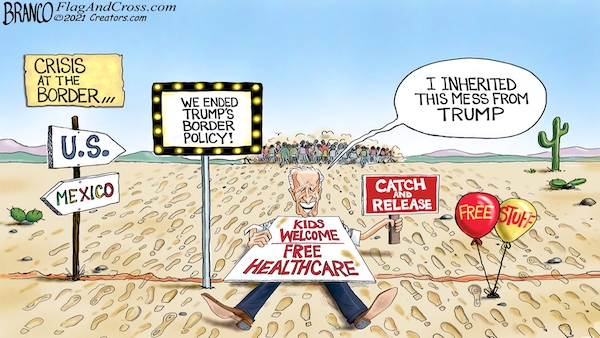 Biden is trying to do damage control for the Illegal Immigration crisis of his own making that’s blowing up at the Border. After doing what he can to open the borders, ending the stay in Mexico program, end the building of the wall, etc., he has a message for the would-be immigrants — don’t come!i Biden says stay home

It isn’t exactly the welcoming message Biden WANTS to offer them, but the stories [of how he’s cramming kids into cages; or into tents where they are underfed, overcrowded, and seldom shower, or finally that teenage boys are packed into a convention center] have been piling up.

Frankly, Joe is looking like a chump over his handling of this issue. Worse, he’s even pissing off Mexicans for how his open-border policies are enriching the criminal cartels in Mexico. NOT a good look.

Don’t misunderstand — Joe really IS ‘all in’ for this illegal immigration idea. He loves it. And why wouldn’t he? It’s the Democrat party’s surest path to assuming permanent power, after all. But the situation is being mishandled so badly that he’s coming off like the incompetent he is.

So now Joe — and his administration — are changing their tune–sort of. After telling illegals not to come he gave a reason, “we’re in the process of getting set up.” In other words, his declaration was don’t come, yet.

"Do you have to say quite clearly, 'Don't come'?

Biden: "Yes, I can say quite clearly: Don't come over…Don’t leave your town or city or community." https://t.co/eNhw9ARhzg pic.twitter.com/isbaH4SD5y

President Joe Biden said in an exclusive interview with [former Democratic Party operative] ABC News’ George Stephanopoulos on Tuesday that his message to migrants is “Don’t come over.”

Amid a surge of migrants and unaccompanied minors on the U.S. southern border, Stephanopoulos asked the president, “Do you have to say quite clearly, ‘Don’t come’?”

“Yes, I can say quite clearly: Don’t come over,” Biden said during the wide-ranging interview in Darby, Pennsylvania.

“Don’t leave your town or city or community,” he added. — ABC

This is pretty much what DHS Secretary Mayorkas said on Good Morning America a day earlier.

Secretary of Homeland Security @AliMayorkas details to @GStephanopoulos how the Biden administration is addressing the migrant surge at the border. https://t.co/Weuf9iDrdE pic.twitter.com/etYLrtLRZA

It sounds like Joe’s solution to the illegal immigration crisis is for those who want to come in to patiently wait on the OTHER side of the border and come across in a more orderly fashion. Any plan for ‘coming across in an orderly fashion’ really doesn’t sound like Joe at all, does it?

The course of action he has decided to take was… for would-be asylum seekers to — now hear me out — wait in Mexico?

All this backpedaling makes THIS rushed decision and Executive Order seem kind of foolish, now doesn’t it?

The Department of Homeland Security announced two significant immigration policy changes late Wednesday that include a 100-day pause on deportations for some undocumented immigrants. The department also announced that asylum seekers who attempt to enter the United States will no longer be part of a controversial policy enacted under former President Donald Trump that has forced tens of thousands to wait in Mexico for American court hearings.

But why should we count on Joe to make the right decision … for practically anything? He’s already shown us who he is…feeble and controlled by his far-left handlers.