His Campaign Denounced It But Biden Never Did 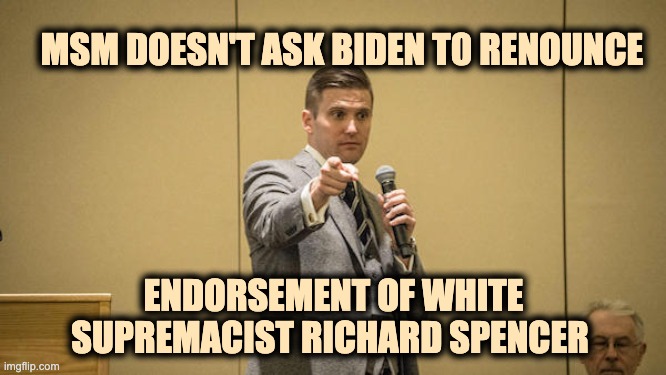 Politics has been a messy business here in the United States for longer than any of us can truly understand, but 2020 has been exceptionally nuts, much of it fueled by the bias of the mainstream media inciting public perception. For example, white supremacist Richard Spencer who had been rejected by mainstream conservatives, jumped on the Joe Biden bandwagon. While Biden’s campaign denounced the endorsement, the candidate hasn’t and the media doesn’t ask Biden if he renounces the Spencer endorsement—they are too busy asking Trump to denounce hate groups he never supported.

Since Chris Wallace asked the question during Tuesday’s debate, the media has been obsessed with the topic, even though Trump has bashed haters, and his Press secretary has repeated his announcements. It got so crazy that at one point during Thursday’s press briefing, Fox’s Jon Roberts became so obsessed, I half-expected him to demand that Trump “Pinky Swear” that he denounces white supremacists. Or ask if the President will cross his heart, hope to die stick a needle in his eye that he doesn’t support hate groups.

Since the BLM and Antifa riots began during the summer, organized hate has made its way into the mainstream political conversation in some surprising capacities.

White nationalist Richard Spencer has said he will be backing Democratic candidate Joe Biden in November’s election after previously distancing himself from Donald Trump.

Spencer, who was one of the key figureheads of the alt-right movement, tweeted how he is “on Team Joe” on Monday, adding in a self-made campaign slogan, “Liberals are clearly more competent.”

In a series of tweets, Spencer further explained his reasoning for backing Biden.

“The MAGA/Alt-Right moment is over. I made mistakes; Trump is an obvious disaster; but mainly the paradigm contained flaws that we now are able to perceive. And it needs to end,” Spencer wrote. “So be patient. We’ll have another day in the sun. We need to recover and return in a new form.”

Of course, one has to wonder if a man whose moral bar is so low that he openly admits to racism is capable of using his platform and his image to disparage Biden by endowing him with such an endorsement? Perhaps he is supporting the Democrat because Biden has a long history of being racist. As of yet, no one in the media has confronted Biden about that endorsement.

In 2016, when David Duke, former Imperial   Wizard of the Ku Klux Klan, announced his support of Donald Trump, the mainstream media rushed to condemn Donald Trump so quickly they practically tripped over their underwear to get their articles out. Even though Trump disavowed the endorsement for much of the campaign, the future president was asked if he supported getting Duke’s endorsement. Other Republicans were asked about Duke’s endorsement ad nauseam also.

Ever since Tuesday’s debate, the media has been asking Trump if he renounces white supremacy.  When will they ask Joe?

Why doesn’t mainstream media take the same approach with Spencer and Biden that they’ve taken with Trump, who has already renounced White Supremacists?  I doubt if they will ever ask Jim Crow Joe, that would assume a miracle. Which is probably the only way to describe things if one day the MSM treated Republicans and Democrats the same.