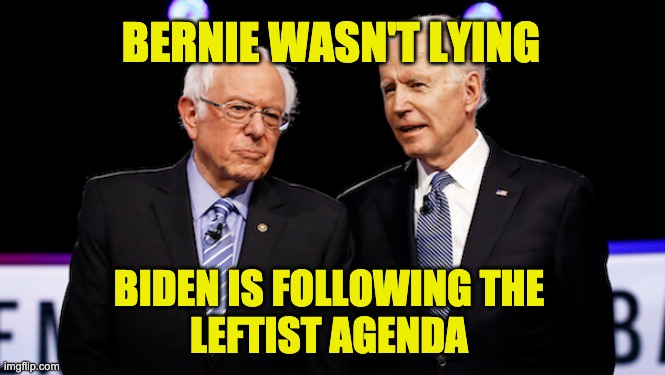 Joe Biden and Kamala scoffed at any mention of socialism. They told you we were crazy to say that he was a ‘moderate’ Trojan Horse for a hard-left agenda. Many even took that at face value. Now that he thinks the election is behind him, the mask is coming off.  What’s that Rush always says? That’s right… ‘do not doubt me.’ Biden progressive agenda

This is our version of the same thing.

Bernie Sanders was upfront about it when he said that Biden would be the most progressive president ever. Sadly very few took him as seriously as they should.

He said (paraphrasing) that the NeverTrumpers and disaffected moderates would help their fight to knock off Trump. Still, as of the first day AFTER the election, the fight for the party’s direction would begin in earnest.

“I think that Vice President Biden campaigned on an incredibly progressive and aggressive agenda,” Bedingfield said on Sunday before pointing to the campaign’s plan to tackle climate change developed with advice from supporters of Sen. Bernie Sanders’s (I-Vt.) presidential bid, including the New York congresswoman.

“He’s going to make good on those commitments,” she continued. “I mean we, you know, he spent time during this campaign bringing people together around this climate plan. He was able to get the endorsement of groups like the Sunrise Movement and the endorsement of labor for this plan.”

“It’s a big, aggressive plan,” Bedingfield continued. “It’s a perfect example of the kind of, you know, big effort that he is going to make to meet this moment and to meet these crises that we’re in.”

The comments from Biden’s deputy campaign manager are some of the first from the campaign on policy issues following the former vice president being declared the winner of the presidential election Saturday. President Trump and his allies have refused to concede and have vowed legal challenges.

It was no secret.

If President Trump’s legal effort to ensure that only legal votes will count fails, we are screwed.

Guys like Mark Levin were calling on ANYONE to look into the 110-page manifesto on his Website. It was all there in black and white.

If Biden manages to survive the court challenges and gains the White House, we will see a push to the Left that will make Obama seem like a blue-dog Democrat by comparison.

Because for these guys — by definition — the goalposts are always shifting toward some fabled utopian destination.

The only problem being, utopia ALSO has a definition. It is a greek word meaning not-a-place.