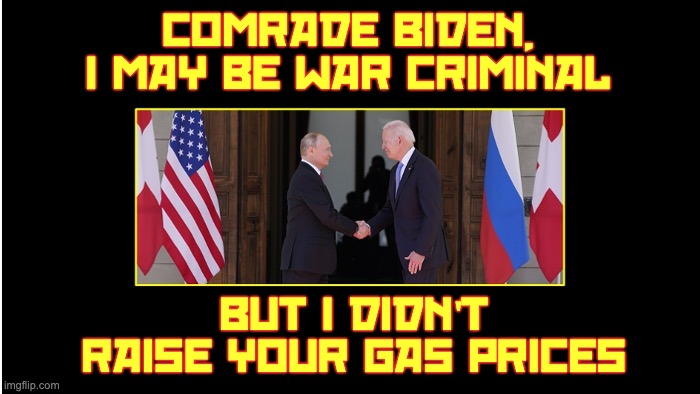 Sorry Joe it’s you, not Putin.

Anticipating Biden’s energy strategy the price of gasoline began to rise on election day 2 20. On the day Biden was elected,, the average price of regular gas was $2.11/gallon. By Inauguration Day 2021, the average cost of regular gas was $2.38/gallon. On that day Biden started canceling the Trump programs that lowered gas prices and made America energy independent. Thirteen months later,, after canceling after canceling Keystone, eliminating drilling opportunities, canceling drilling contracts, etc.—on Valentine’s Day 2022—ten days before the Russians invaded Ukraine, the price was $3.64/gallon. That was a 73% increase since his election and 53% higher than inauguration day.

Now nearly 18 months into his first term, you would think that things at 1600 Pennsylvania Avenue would start clicking for Joe Biden.  Besides, he’s been there before, in the West Wing.  And the Senate for decades before that.  Joe Biden, at least on paper, should know what he’s doing.

Instead, our nation faces frustratingly simple problems that have gone unresolved for months on end, mutating and evolving into crises of all manner.

And, in perhaps the most cliché indicator of a President’s success, Joe Biden can’t even manage to get gas prices under control.

The average U.S. price of regular-grade gasoline spiked 33 cents over the past two weeks to $4.71 per gallon.

The average price at the pump is $1.61 higher than it was one year ago.

Nationwide, the highest average price for regular-grade gas is in the San Francisco Bay Area, at $6.20 per gallon. The lowest average is in Tulsa, Oklahoma, at $3.92 per gallon.

Yes, some of the increase was because of the Ukraine/Russia war, but the bulk of the increase is due to the anti-energy Biden programs which he instituted on his first day in office.

Truckers were hurting, too.

According to the survey, the average price of diesel rose 9 cents over two weeks, to $5.66 a gallon.

The exorbitant gas prices, coupled with the ongoing glut of Bidenflation, has had Americans feeling incredibly squeezed of late, and it’s hard to see a path forward for the Democrats on any other issue until our economy is sound again.