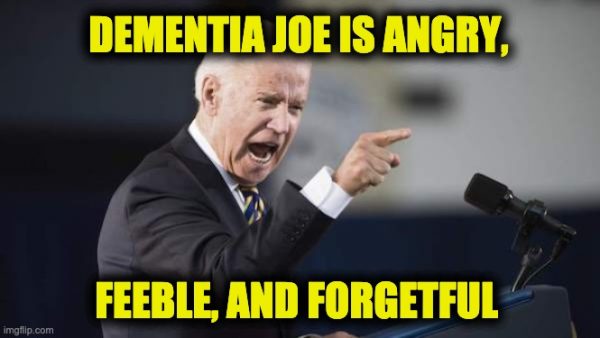 People of Baby Boomer age or older remember they recited the Pledge of Allegiance every day— at school—first thing in the morning. We would stand up, face the American Flag that was in every classroom, put our hands over our hearts, and say:

I pledge allegiance to the Flag of the United States of America, and to the Republic for which it stands, one Nation under God, indivisible, with liberty and justice for all.

It was and still is firmly fixed in people’s minds—unless, of course, one is starting to ‘lose it.”

During a campaign speech on Monday, Joe Biden attempted to quote the Pledge of Allegiance, and instead delivered a mutilated version of it, saying, “I pledge allegiance to the United States of America, one nation, indivisible, under God, for real.”

"I pledge allegiance to the United States of America, one nation, indivisible, under God, for real." pic.twitter.com/Gct4AEVWog

The day before, on Sunday, Biden was in Philadelphia and inflated the number of China Virus dead by a factor of one thousand,

“If Donald Trump has his way, the complications from COVID-19 which are well beyond what they should be, it’s estimated that 200 million people have died probably by the time I finish this talk,”

A few days earlier, Biden forgot that North Korea had nuclear weapons. North Korean nukes were a significant issue when he was VP. They exploded four atomic weapons during the Obama presidency.

Like his bungling of the Pledge of Allegiance, Biden’s errors were not done on purpose but were more likely a result of his worsening Dementia.

Biden has always been a gaffe meister. But generally, his gaffes involved saying something stupid at the wrong time, such as when Obama was about to sign Obamacare. Joe leaned over to the President and said, “This is a big t*cking deal'” Or during the swine flu outbreak in 2009 when he told America not to fly, warning, “When one person sneezes, it goes everywhere through the aircraft. That’s me.” Or during a 2008 campaign appearance when he addressed a Texas state senator who is confined to a wheelchair, “I’m told Chuck Graham, state senator, is here. Stand up, Chuck, let ’em see you.” Obviously, Graham couldn’t stand up.

The former VP’s 2019/20 gaffes are different. It’s not that he is saying stupid things at the wrong time—that’s fun. His campaign gaffes are scary. He is forgetting and mixing up easy things, like the Pledge, or when North Korea had nukes. And when those faux pas are combined with the fact that he seems angrier than earlier campaigns, it is clear he is suffering from the early stages of Alzheimer’s or some other form of Dementia.

Beyond disagreeing with Biden on most issues, the fact that he is losing his cognitive ability makes the thought of him in the White House is extremely frightening.