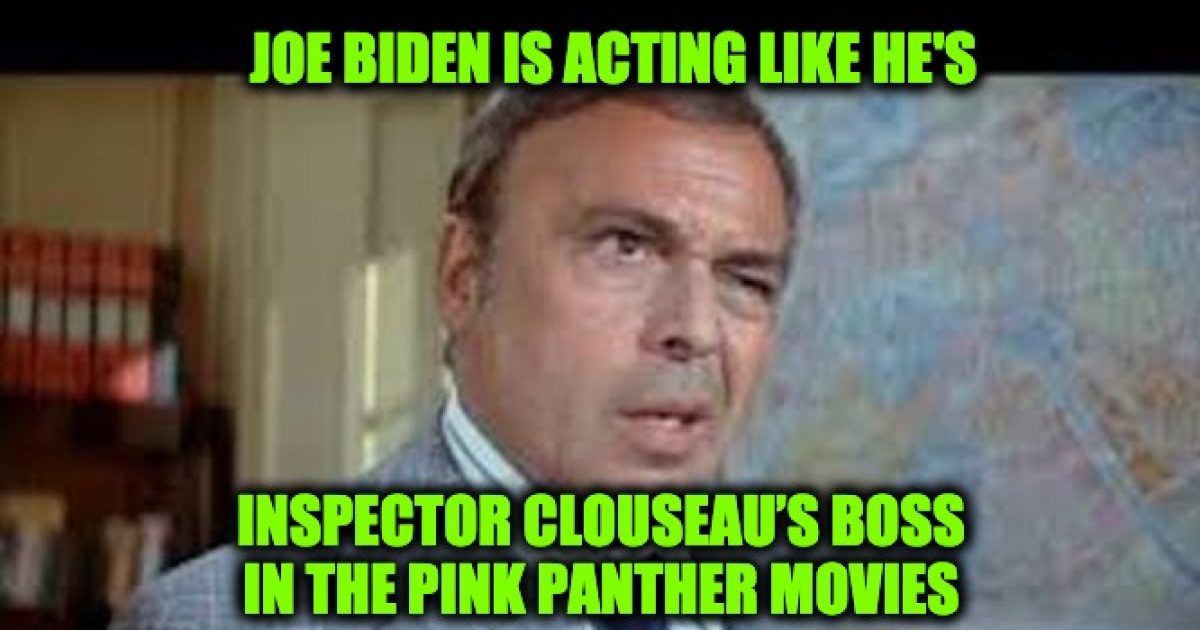 As Hunter’s business dealings become viral Joe Biden is acting more and more like the Herbert Lom character in the old Pink Panther movies. Lom played Inspector Clouseau’s Boss who hated the Peter Sellers character so much that he kept trying to kill him. Lom’s character keeps hurting himself in his attempts and eventually winds up insane. It seems that President Trump has caused Joe Biden to take a seat on the crazy train.   Biden Peter Schweizer

First, he was threatening to have a fistfight with President Trump. Last week he called on networks to ban Rudy Giuliani from their airwaves. Now he is going after the bible of progressivism, the NY Times for running an op-ed by Peter Schweizer. Biden campaign spokeswoman Kate Bedingfield sent a letter to Times executive editor Dean Baquet, taking issue with an op-ed about the Hunter Biden story written by investigative reporter Peter Schweizer. The Op-Ed contended that what Joe Biden did was probably not illegal, but that corruption laws needed to be tightened up to prevent the Biden and the Elane Chao/Mitch McConnell scams from happening again.

Yes /Mitch McConnell, perhaps to show that the problem is in both major parties, Peter not only discussed the Hunter Biden scams but:

The Bidens are hardly alone. President Trump’s transportation secretary, Elaine Chao, and her husband, Senator Mitch McConnell, are being accused of having profited from their commercial ties to Beijing. In 2004, the two had a net worth of about $3.1 million, according to public disclosures. Three years later, the range was $3.1 million to $12.7 million. The next year, their net worth rocketed to $7.3 million to $33.1 million.

What changed? In 2008, Ms. Chao’s father, James Chao, gave the couple a “gift” of $5 million to $25 million (politicians are required to report money in ranges, not exact amounts). Certainly, their wealth has continued to grow.

Mr. Chao’s generosity was made possible by the fortune he has amassed through his shipping company, Foremost Group, which has thrived in large part because of its close ties with the Chinese government. In late 1993, Mr. Chao and his son-in-law, Mr. McConnell, traveled to China as guests of the state-owned shipyard conglomerate and military contractor, China State Shipbuilding Corporation. There they met with an old classmate of Mr. Chao’s, the former Chinese president Jiang Zemin.

Oliver Darcy tweeted the letter (below), but some of the highlights include Kate Bedingfield’s best attempts to slander Schweizer, Giuliani, and John Solomon.

And later on, she added

What I have seen an interview with Kostiantyn Kulyk deputy director of Ukraine’s Prosecutor General’s International Legal Cooperation Dept explaining they had evidence of the Biden family wrongdoing that they wanted to hand-deliver to AG Barr, but the US Ambassador, Marie L. Yovanovitch prevented Kulyk and his team from getting visas to come to America.

Here's the letter Biden deputy campaign manager @KBeds sent NYT editor Dean Baquet. "Are you truly blind to what you got wrong in 2016, or are you deliberately continuing policies that distort reality for the sake of controversy and the clicks…?" https://t.co/fCJ8Ii32Ds pic.twitter.com/DoVzSm5MXI

Regular readers of this site know that I am a fan of Peter Schweizer. Not only is he a friend who was one of my editors when I wrote for Breitbart, but Peter’s incredible book Clinton Cash. Clinton Cash, which was a quantitative fully referenced analysis that exposed how Bubba and Hillary Clinton went from being “dead broke” after leaving the White House to amassing a net worth of over $150 million, with $2 billion in donations to their foundation. Schweizer was able to tie the wealth accumulated during Mrs. Clinton’s tenure as Sec. of State through lucrative speaking fees and contracts paid for by foreign companies and Clinton Foundation donors, to corresponding actions by the State Dept. And even more than that, I dare say if there were no Clinton Cash, there would be no coverage of Ms. Clinton’s email and other scandals.

Peter’s next book was partially about the Hunter Biden Ukraine and China Scandals. Titled Secret Empires: How the American Political Class Hides Corruption and Enriches Family and Friends if you haven’t read the book yet, you should because it will give you the background of what’s been in the news and what’s to come. The book still available at Amazon exposes both republicans and democrats such as Barack Obama, Joe Biden, John Kerry, Mitch McConnell, who was referenced in the NY Times article, and lesser-known politicians, using their office to help family and friends get rich. Just like Peter’s other books Secret Empires is well researched and referenced

It’s strange how the liberals working hard to discredit Peter Schweizer and the Hunter Biden story. Still, those same liberals loved Peter Schweizer in 2012 when Steve Kroft used Schweizer’s work as the basis for a blockbuster report on CBS’s 60 Minutes about Congressional insider trading. The Segment called “Insiders: The road to the STOCK act” relied heavily on the reporting in Schweizer’s book “Throw Them All Out,” and supplementary Schweizer reporting. The book demonstrates how politicians used their positions to participate in insider trading and to protect themselves from charges. A year later, Kroft used Schweizer for another 60 Minutes segment, this time to demonstrate how members of Congress use the funds of their political action committees for private inurement.

Allow me to end on a personal note,  Peter Schweizer was the editor of Breitbart’s “Big Peace” when I wrote for them 2010-2012. As an editor, he was a stickler for facts and back up. Based on reading “Clinton Cash” and Secret Empires and checking some of footnotes/references to read the original documents, I am convinced that Schweizer demands of himself an even higher level of proof and back up than he demanded of his reporters. It is Biden’s spokeswomen, Kate Bedingfield, who needs to self-check her facts.