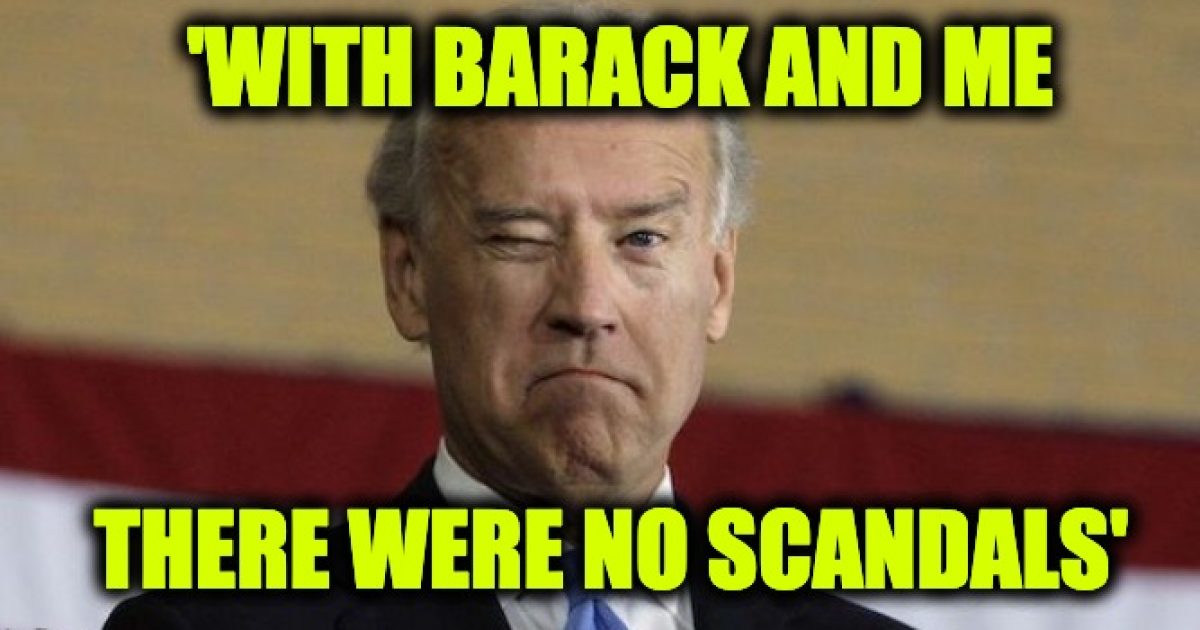 Democrats refuse to admit that the Obama years were a complete and utter disaster. Two terms, few results. At least, few positive results for the country. That’s kind of a problem. And even some of those positive results were by accident like his love affair with Iranian mullahs, which gave Iran billions of dollars and a pathway to a nuclear bomb but got motivated two enemies Israel and Saudi Arabia to talk behind the scenes to help protect each other from an Iranian nuke attack. Biden no scandals

The schmo of the United States (SCHMOTUS), former Vice President Joe Biden, sees the Obama administration as perfect. He told a voter at an NH campaign stop, ““The thing I’m am proudest of with Barack and me is that there were no scandals.”

Sure, they were like boy scouts. And for eight years, they volunteered to help walk new taxes across the street.

This indicates that good ole’ Joe is either trying to BS his way to the Oval Office,  he is suffering from a form of dementia, or he is auditioning for a role in a sit-com when he loses the election.

.@JoeBiden brags to N.H. voter: “The thing I’m am proudest of with Barack and me is that there were no scandals.” pic.twitter.com/nmmeRXKjsQ

Here we go again… Allow me to remind you all:

And that didn’t even include Joe’s interactions with Ukraine to protect his son Hunter.

Other tweets didn’t send him examples of scandals, just ripped the SCHMOTUS:

And @JoeBiden takes the lead in the delusional olympics over @HillaryClinton

In all fairness, I doubt he even remembers being VP.

I don’t know about that, Hillary still believes she won, and yesterday she said she could be Trump again in 2020. IMHO she still has a slight lead.

And @JoeBiden takes the lead in the delusional olympics over @HillaryClinton

If a scandal falls in the forest and no fake journalists write about it, is there really any scandal?#LyinJoe#ChinaJoe@BarackObama #Biden2020

So Biden’s memory is shot? Explains why he can’t remember those calls to Ukraine.

Only because the press was in their pocket!

So which do you think folks, is Joe Biden lying, losing it, or does he just believe a press that treated the Obama administration as if ever one of their actions came down from Mount Sinai with Moses and the two tablets?