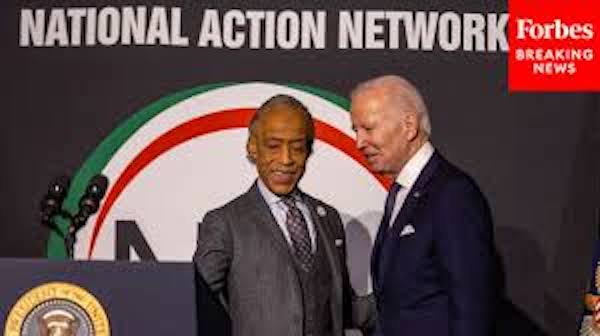 We refuse to believe that the bank of justice is bankrupt. We refuse to believe that there are insufficient funds in the great vaults of opportunity of this nation. And so we’ve come to cash this check, which will give us upon demand the riches of freedom and the security of justice (…) I have a dream that my four little children will one day live in a nation where they will not be judged by the color of their skin but by the content of their character.”  Reverend Dr. Martin Luther King Jr’s  “I Have A Dream” Speech

Yesterday, just by going to a breakfast that claimed to honor the Reverend Dr. Martin Luther King Jr. but run by Al Sharpton, President Biden advertised that he did not believe in Dr. King’s message of Justice and Tolerance. The breakfast was sponsored by Al Sharpton, a man who built his career on hatred and incitement of violence. Thus, Biden commemorated MLK Jr by supporting a man who disregarded Dr. King’s message.

It started with a 15-year-old Black girl named Tawana Brawley claiming she was raped by a gang of white men, smeared with feces, and stuffed in a garbage bag. Later, a grand jury, after interviewing 180 witnesses, concluded her story was a hoax.

Before the grand jury, Al Sharpton accused Steven Pagones, former Assistant District Attorney in Dutchess County. During a March 1988 news conference, Sharpton blamed Stephen Pagones for being one of Brawley’s rapists. He also accused district attorney William Grady of trying to cover up Pagones’ involvement in the crime. He demanded that Governor Mario Cuomo arrest the two “suspects. Sharpton refused to meet with NY Attorney General Robert Abrams during the Tawana Brawley hoax because (he claimed) meeting the Jewish Abrams would be “like asking someone who watched someone killed in the gas chamber to sit down with Mr. Hitler.”

Remember the controversy surrounding the Duke lacrosse team? They were falsely accused of rape and were victims of Sharpton’s justice. Without any facts,  Sharpton declared that these” rich white boys” had attacked a” black girl” and warned that if arrests were not made immediately, there would be no peace. Eventually, the woman admitted she had invented the rape story and recanted. Would Martin Luther King Jr. have agreed to Sharpton’s call for violence? No, that was the opposite of his message. But by going to Al Sharpton’s breakfast, Joe Biden showed America he agreed with Sharpton that violence is the appropriate way to solve a problem.

Sharpton told his radio audience that Republicans view black people as subhumans, much as Adolf Hitler saw Jews. “It seems like they [some of the right-wing] act as though some wiping out of people … is alright. It’s not alright to do to any innocent people…. [T]o wipe out innocent people just ’cause of who they are, like was done in Hitler’s Germany, or was done to Native Americans, is not justified.”

He has attacked moderate black politicians close to the Democratic Party as “cocktail sip Negroes” or “yellow ni**ers.

After supposedly helping her family after her father’s death, Eric Garner’s daughter said Sharpton was all about the money. A January 2015 report explained that he gets extortion money from corporations, so he won’t call them racist.

Those are all examples of Sharpton’s actions contrary to Dr. King’s teachings. And President Biden displayed support by speaking at an MLK Jr breakfast run by the hater Al Sharpton.

Throughout his career, Rev. King was a friend and supporter of the Jewish community. Two decades after MLK was murdered, Sharpton ignored Rev. King’s friendship with the Jewish community. Instead, Sharpton made Antisemitism one of his chief weapons for growing his popularity. He incited pogroms in Crown Heights in Brooklyn, NY, and a Jewish-owned store in Harlem. For details about each of those significant anti-Semitic riots incited by Sharpton, click the preceding links.

There are many more examples than the above.

Based on his history of lying, promoting violence, and hatred, no President should display acceptance of Sharpton’s actions by supporting one of his events.

Even worse, Joe Biden remembered Reverend Dr. Martin Luther King Jr by making the keynote speech at an event run by Al Sharpton, a man who built his career by ignoring Dr. King’s teachings.   By speaking at Sharpton’s breakfast, Biden was voicing his disagreement with the teachings of Dr. Martin Luther King Jr. and agreement with Sharpton’s hatred and his incitement of violence.