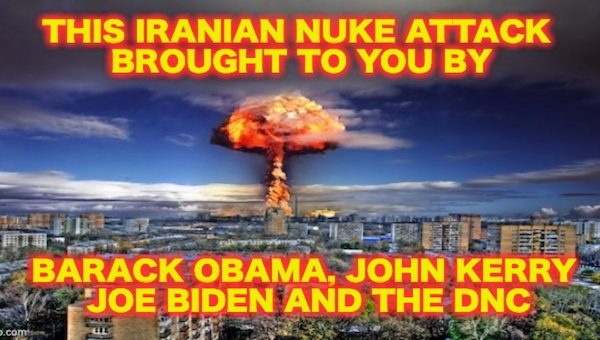 Well, it’s time for weak-kneed Joe to make the United States look weak again. This time he’s capitulated to Iran. In a bid to get Iran to move forward on talks, Biden restored the sanctions waiver for their nuclear program that allowed Russian, Chinese, and European companies to do “non-proliferation” work at Iranian sites. According to Foreign Affairs, here’s the problem: Russia and China have already been helping Iran. And the work may not necessarily be related to “non-proliferation.” In fact, if one believes that Iran will accept anything to do with “non-proliferation,” I have a bridge in Brooklyn to sell you. Even the unexpected happens, and Iran agrees they won’t follow what they agreed upon, just as they did with the Obama version,

The waivers had allowed Russian, Chinese and European companies to carry out non-proliferation work to effectively make it harder for Iranian nuclear sites to be used for weapons development. The waivers were rescinded by the United States in 2019 and 2020 under former President Donald Trump, who pulled out of the nuclear agreement.

“The waiver with respect to these activities is designed to facilitate discussions that would help to close a deal on a mutual return to full implementation of the JCPOA and lay the groundwork for Iran’s return to performance of its JCPOA commitments,” according to the report, a copy of which seen by Reuters.

Proponents of the sanctions waiver believe that Iran will have a more difficult time completing a nuclear bomb with the other countries present at the sites. If the countries were simply European ones, that might be true. But since Russia and China are in the mix, that debate immediately becomes suspect.

Some analysts believe that even with a restored nuclear deal, Iran is likely far enough along with their program that a renewed JCPOA would be a nonstarter. The sanctions waiver gives them a leg up on the process.

Administration officials concluded late last year that Iran’s nuclear program had advanced too far to re-create the roughly 12-month so-called breakout period of the 2015 pact,” The Wall Street Journal reported this week. “Despite the change, the U.S. is pushing ahead with talks. A revised deal needs to be reached soon, the officials said, to leave the U.S. and its allies with enough time to respond to an Iranian nuclear buildup.”

At a time when Iran is targeting the United States and our allies across the Middle East, the Biden administration is dismantling sanctions to allow them to build up their nuclear program.

Along with unfreezing billions of dollars and looking the other way at Iranian sanctions-busting, restoring civil nuclear waivers for Iran is just one more step the Biden administration is taking toward reviving a weaker version of the catastrophic Obama-Iran nuclear deal.

President Biden and his officials are also declaring for themselves the ability to ignore requirements written into law mandating that Congress has the opportunity to review and reject their reckless concessions to Iran.

This attempt to usurp power from Congress will be met with a sustained and aggressive response.

The Ayatollah exploits these civil nuclear waivers to build up Iran’s nuclear program with the express intention of eventually developing nuclear weapons to inflict destruction on America and our allies. When he chants ‘Death to Israel’ and ‘Death to America,’ he means it.

President Trump rightly ended these waivers, and now the Biden administration is resurrecting them. It’s unconscionable, and we need to end these waivers once and for all.

Biden is not trying to recreate the JCPOA out of a hatred of Israel, as many contend. Perhaps some of his other policies are created to smack Israel, But the JCPOA not only puts Israel in existential danger but will be dangerous to the “great Satan” (the U.S.) and the Sunni states.

IMHO Biden’s desire to get back into the deal stems from naivete. Much of what America was told about the JCPOA by Obama and Kerry was false. Most of the MSM covered up the lies back then and are still not reporting the truth about the deal.   If Biden forces America back into the JCPOA, even a new version, it is doubtful that he will admit to or fix Obama and Kerry’s lies about the original JCPOA.