Biden Loses Cool. Snaps At Coed, Grabs Her Arm And Pulls Her Back When She Tries To Leave 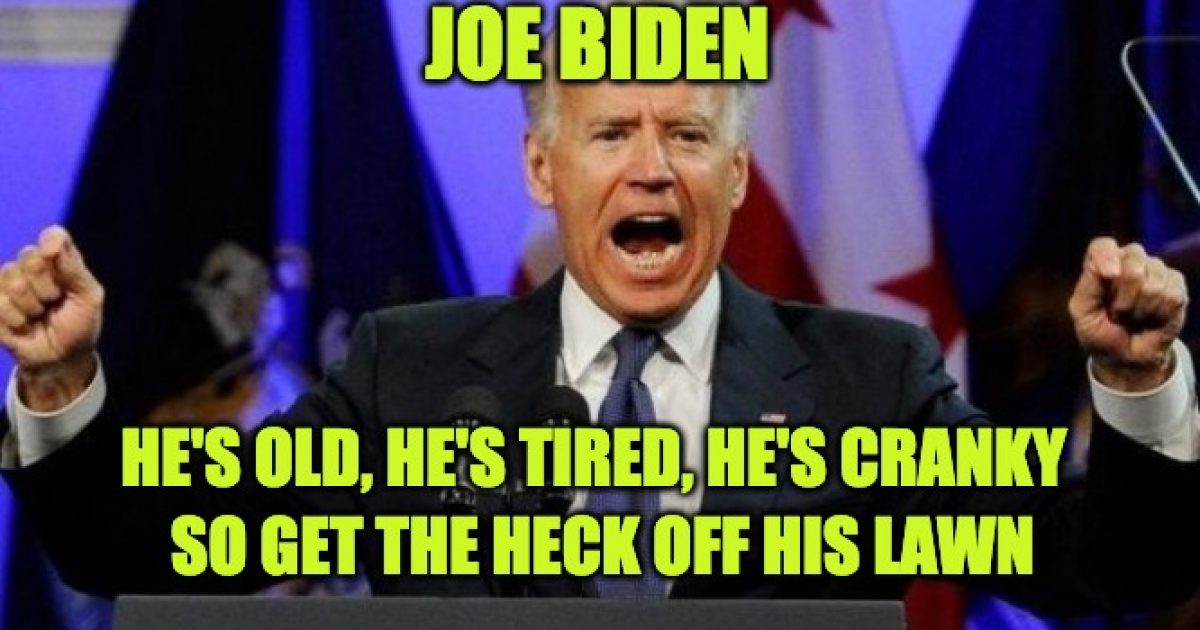 Today “Good ole Joe” was just “Angry Old Joe” While appearing at the Iowa State Fair on Thursday, the former SCHMOTUS, and front running candidate for the Democratic presidential nomination Joe Biden lost his cool in public. He snapped at and grabbed the arm of a conservative coed who asked him a question. This raises the question if Joe Biden loses his cool when being asked a question by a conservative co-ed when he is just running for POTUS, can he handle the stress of being POTUS?

“My team just forwarded this video to me,” he tweeted.  “Watch former Vice President Biden forcefully grab one of our young field staffers at yesterday’s Iowa State Fair after she asked him how many genders there are.”

My team just forwarded this video to me

Watch former Vice President Biden forcefully grab one of our young field staffers at yesterday’s Iowa State Fair after she asked him how many genders there are pic.twitter.com/1qmpJxJlzO

The coed, identified as “Katie,” asked Biden, “How many genders are there?”  Biden thought for a bit before answering, “There are at least 3.” Katie followed that up with another question: “What are they?”  Sounds like a fair question, since we’re only aware of two.

Biden lost his cool and told Katie, “Don’t play games with me, kid!” But he wasn’t finished. As she tried to walk away, he grabbed Katie by the arm and told her, “Oh, by the way, the first one to come out for marriage was me.”

Katie later said she was “very mad” at the treatment she received from Biden. But at the bright side at least he didn’t tell her to get off his lawn. After all, he takes pride in being a cranky old guy.

Of course, the people on Twitter laid into him.

Omg the man has lost it.

That response makes the massive assumption that he once had it.

He was trying to get close to her hair. #CreepyJoe

No dude she’s too old for that. Joe likes younger hair.

Unacceptable behavior from Biden. Imagine the outrage if Trump did that? It would be blasted on the #FakeNews media 24/7.

Also, what does gay marriage have anything to do with how many genders there are?

Courtney, do you really expect logic from a democrat?

This behavior is unacceptable….@JoeBiden needs to apologize.

Apologize? Sorry Student, he will only do that if the truth fairy sprinkles dust on him.

@JoeBiden ,SHAME ON YOU JOE BIDEN, can’t handle the heat get out of the RACE!!!

Rusty, you are right and to quote Biden, that’s a big F**king deal

He doesn’t know how to answer the question. He showed his anger towards her both with his response, and then grabbing her. Absolutely awful behavior. He needs therapy.

I don’t know about therapy, but when you combine his age with the way he looks, Biden definitely needs a nap.

Jokes aside, it seems as if the Schmo of the US (the SCHMOTUS) is having some problems handling the pressure of running for president. But if he snaps at a COED asking questions, how will he react to a tough question from China’s president, or if the country was threatened with terrorism or a nuclear attack. Forget politics, this guy can’t handle the pressure of being president.