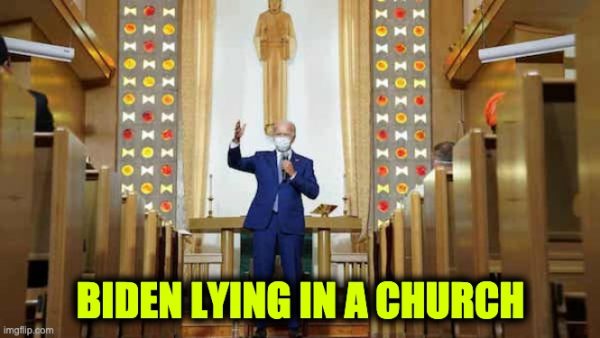 After saying President Trump shouldn’t go to Kenosha, Wisconsin, Democrat White House nominee Joe Biden went to Kenosha in a vain attempt to “one-up” the president.  While there, he spoke to a small group at the Grace Lutheran Church and, while standing in front of a cross, repeated the false Charlottesville lie that Trump called neo-Nazis, “fine people.”  Biden Lies In Kenosha Church

He claims to be an observant Christian and lies in a church?

Two days after Charlottesville, Trump condemned racism, including the KKK, neo-nazis, and white supremacists. He called racists “repugnant to everything we hold dear as Americans” and said, “We are a nation founded on the truth that all of us are created equal. We are equal in the eyes of our Creator, we are equal under the law, and we are equal under our Constitution. Those who spread violence in the name of bigotry strike at the very core of America.” He then spoke about the tragic death of Heather Heyer, who was hit by a car when a white supremacist drove into a crowd of protesters wanting the statue of Robert E. Lee removed.