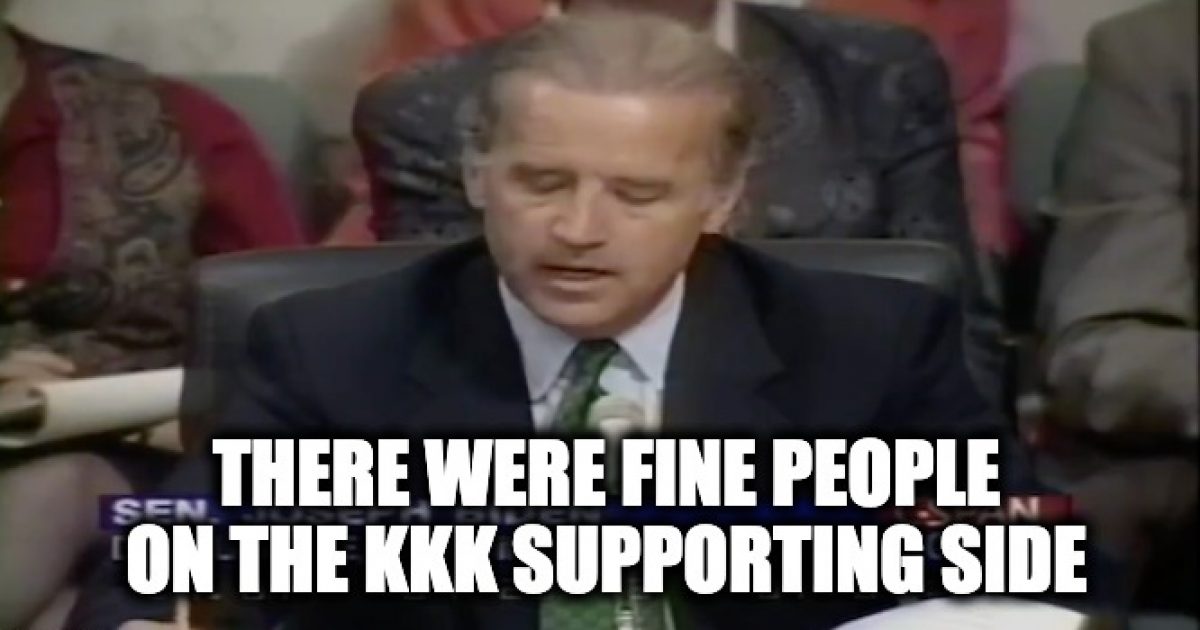 Former SCHMOTUS Joe Biden accused President Trump of giving credibility to “racist f–ks” during a speech in Philadelphia the first week of June, but stopped himself just before uttering the expletive and said he meant “folks.”  That is a lie. Trump is not a racist, Joe Biden on the other hand has made racist statements and supported racist people his entire career.

President Trump’s supposed racism is a liberal invention. President Donald Trump has repeatedly condemned racism and white supremacy, but liberals and the MSM choose to ignore reality. They also ignore the pre-pandemic historically low black unemployment rates, and the passage of criminal justice reform, a vital issue for African-American voters. Liberals and the MSM also lie about what the President said about Charlottesville. When he said, there were good people on both sides, he wasn’t talking about the Neo-Nazis.

As Dennis Prager pointed out:

On the other hand, Joe Biden has a history of making racist comments and supporting racists.

For example, when he was in the Senate, Biden praised a pro-Confederacy group that supported white-supremacists and the KKK and who prominently displayed the Confederate flag as “fine people.”

The video below shows the Democrat candidate singing the praises of the United Daughters Of The Confederacy (UDC). In the clip, time-stamped on July 23rd, 1993, Biden states that the group is “an organization made up of many fine people who continue to display the Confederate flag.”

The UDC has been identified as supporters of the KKK and advocates for white supremacy.

The clip is especially significant because Biden launched his campaign, explicitly smearing President Trump for a media-generated hoax involving his comments in Charlottesville in 2017.

Inevitably this clip will result in a 24/7 news cycle promoting it as evidence that Mr. Biden supports white supremacists and neo-nazis, right?

When Obama was running for President the first time, Biden made the racist comment,

“I mean, you got the first mainstream African-American who is articulate and bright and clean and a nice-looking guy.”

Why is he claiming that Obama is the only mainstream African American who is articulate and good looking? That’s racist!

In 2006 the former SCHMOTUS said, “You cannot go to a 7–Eleven or a Dunkin’ Donuts unless you have a slight Indian accent” Another Racist comment.

At a campaign event last summer in Iowa, Biden told supporters, “poor kids are just as bright and talented as white kids.” He quickly corrected himself after some applause by adding: “Wealthy kids, black kids, Asian kids.”

Isn’t it racist to believe that all poor kids aren’t white?

Biden once bragged that he got an award from Segregationist Governor George Wallace.

When fighting busing in 1977, Biden claimed

Racial jungle? If a Republican said that they would be branded a racist forever.

While discussing the need for criminal justice reform at a luncheon in June 2019, Biden said people must continue to work to recognize black as equals so that African American mothers, like the mother of Trayvon Martin who was shot by a neighborhood watch volunteer in Florida in 2012, no longer have to fear their sons will be shot when they go outside.

“We’ve got to recognize that the kid wearing a hoodie may very well be the next poet laureate and not a gangbanger,” Biden said.

That statement angered Senator Spartacus from NJ, who is African American.

This isn’t about a hoodie. It’s about a culture that sees a problem with a kid wearing a hoodie in the first place. Our nominee needs to have the language to talk about race in a far more constructive way. https://t.co/c2BFSSOHro

Most recently, Biden was interviewed interview on The Breakfast Club radio show by host ‘Charlamagne Tha God.’ and decided he had the right to determine someone’s race—because all African Americans must vote the same way.

His exact words were

“ “You got more questions? Well I’ll tell you, if you have a problem figuring out whether you’re for me or Trump, then you ain’t black,”

A shocked Sen. Tim Scott, who per Biden is no longer black, told Stewart Varney the next day,  that presumptive Democratic presidential nominee  made the “most condescending and arrogant comments toward the black community he has ever heard.”

“And President Trump comes along, and through his criminal justice reform, corrects the absolute mistakes made by Joe Biden; 1.3 million African-Americans voted for Trump,” Scott said. “He’s saying to 1.3 million African-Americans that you are not black? Who in the heck does he think he is? That is the most arrogant, outrageous comment that I’ve heard in a very long time and I take offense to that.”

Here’s the truth the liberals and the MSM will never acknowledge, President Trump has done more for Blacks in 3 years as President than Biden has accomplished for Blacks during his entire life. On the other hand, it is Joe Biden not Trump, who has a career track record of being racist.