Liberal Media Confirms: Biden is The LEAST Scrutinized Candidate EVER 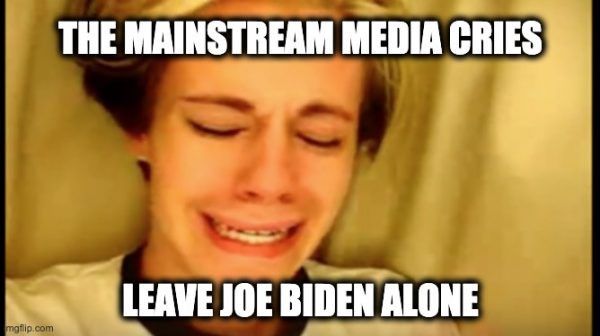 “The media’s obsession with Trump — and Trump’s compulsion to dominate the news — allowed Biden to purposely and persistently minimize public appearances and tough questions,” they write.

The Democrat nominee, as a result, has faced the least amount of media scrutiny of any presidential candidate in modern history.

Axios describes Biden as “a prohibitive favorite” to win the election and a man “who got there with lots of luck and shockingly little scrutiny.”

Congratulations MSM. Isn’t it a little late to realize you did not do one of your most basic jobs – scrutinizing a possible US President? MSM was soft on Obama for 8 years and even softer on Biden every day this year. The press in America is broken. https://t.co/mfBuUOVFc5

According to numbers provided by the Trump campaign and which “the Biden campaign didn’t dispute,” the President, since the end of August, has fielded 753 questions from the media.

Biden, by comparison, has answered just 365.

Perhaps that is why Biden has been able to avoid answering questions on court-packing, can say he supports fracking after repeatedly saying he’d ban it, and is able to distance himself from the Green New Deal even though it’s touted on his campaign website.

Imagine the collective outcry if President Trump ever said voters don’t deserve to know his stance or if he flip-flopped on something.

Biden is asked if voters deserve to know if he will pack the Supreme Court.

Does the Media Side With Biden and the Democrats?

To be sure, the Axios report suggests that President Trump himself is partially to blame for the slanted media coverage.

“Trump continued to light himself on fire, bombed the first debate, then got the coronavirus,” they write. “He balked at a virtual debate, giving Biden another offramp.”

This is why Team Biden usually calls a "lid" after breakfast… https://t.co/zsTlkkpVPA

“Biden has been the least-scrutinized presidential candidate in modern history at a great disservice to the voters, but the press still has time to rectify that,” Trump campaign spokesperson Andrew Clark told Axios.

Will that happen? It seems highly unlikely.

In October of 2016, the Center for Public Integrity reported that journalists were “shower(ing) Hillary Clinton with campaign cash.”

“People identified in federal campaign finance filings as journalists, reporters, news editors or television anchors – as well as other donors known to be working in journalism – have combined to give more than $396,000 to the presidential campaigns of Clinton and Trump,” they wrote.

“More than 96 percent of that cash has benefited Clinton.”

Cornell Law School professor and media critic [and publisher of Legal Insurrection] William A. Jacobson said the lack of scrutiny for Biden is impacting the election.

“Mainstream media lack of scrutiny of Biden is breathtaking and unprecedented, and has influenced the election in Biden’s favor,” Jacobson told Fox News.

“It proves the point that media bias is demonstrated not only by what the media does cover, but also by what it does not cover,” Jacobson added. “And in this election year, the media has permitted Biden to hide from the type of contentious interactions the media has with Trump, and even when Biden is available, his handlers strictly control the interactions.”

The bulk of these journalists are now likely covering the 2020 campaign, ignoring Biden’s dementia, and hiding/censoring Biden’s scandals.